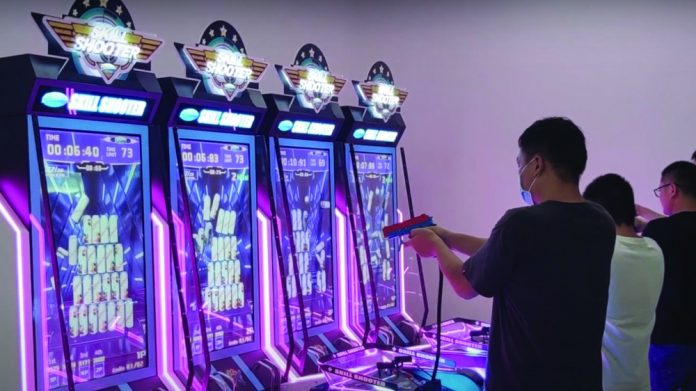 With trade shows now back on the agenda, manufacturer and distributor Electrocoin will launch its latest product, Skill Shooter, on the European stage in Barcelona at this year’s IAAPA Expo.

Electrocoin’s newest product addition, Skill Shooter, will be given its continental debut at IAAPA Expo Europe 2021 in Barcelona on 27-30 September.

An action-packed video target shooting game, Skill Shooter allows players to test their reflexes across numerous different exciting game modes as their speed and accuracy are put the test. Throughout the experience, players advance through the different stages shooting bottles, targeting boards, moving targets, and more – exercising their proficiency in different environments. The faster and more accurate aim a player has, the more points and tickets that are rewarded.

“Skill Shooter, our latest video game offering, provides a realistic shooting experience for players,” detailed Electrocoin’s John A. Stergides. “The recoil feature is a very immersive touch, which along with the exciting sounds and adrenaline filled stages, makes players feel like they really are on a live target range as they hone their shooting skills.

“There are different scenarios as players work their way through the different stages testing their speed and accuracy when shooting the targets. The faster and more accurate they are, the more points they will win.”

Stergides added that feedback so far has been extremely positive, with operators appreciating the games’ multiplayer capability which enables four units to be linked together for competitive play. Skill Shooter also impressed on an aesthetic level, its attractive cabinet housing a 50” screen with LEDS and bright colours on the outside. The product is switchable between Skill Challenge, Ticket Redemption and Prize Vend, thus giving operators an option that suits their location.

Skill Shooter will be launched in Europe for the first time at IAAPA on Electrocoin’s stand 2-1528.