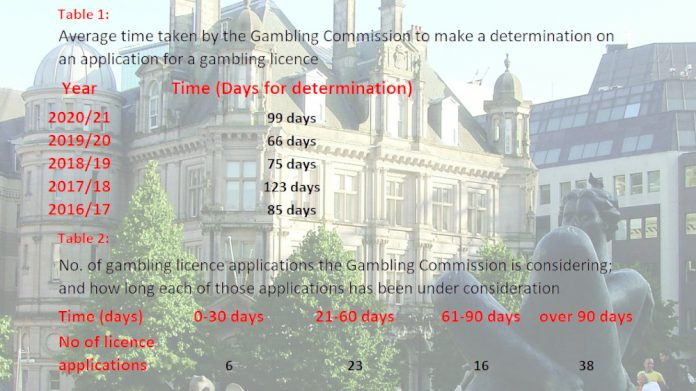 These are tough times for the regulator with the Gambling Commission under fire on multiple fronts. The last thing it needs then is a failure to meet its obligations on bread and butter stuff like approving licence applications. But in this area too, it’s struggling despite statistical pirouettes to parliamentarians suggesting otherwise.

A random test of GamCom KPIs undertaken by Coinslot on a small sample of operating licence applications has revealed that 75 percent of these applications failed to meet the GC’s 16 week timeframe for determination. A total of nineteen applications were sampled by Coinslot between 2020-21: five were determined within the four month deadline, but the remaining 14 went over the timeline – the longest by almost three months – and two are still in the system some twelve weeks past the GC deadline.

Whilst by no means a large quota, the number assessed by Coinslot is significant – 19 OLs represents almost a quarter of the number of licences currently being processed at the GC.

And further breakdown of the random sample does not deliver much in terms of a positive assessment. In 2020, the applications averaged 118 days to determination instead of the GC target of 112; this current year that average rose to 130 days – almost three weeks late.

So what’s a week or two to wait you could say – especially with Covid restrictions and lockdown? Who’d begrudge the Gambling Commission a bit of respite in times of national turmoil.

Well, probably the 14 applicants in the survey whose licence applications went way over time.

For these applicants, the average wait for determination is actually 145 days – that’s nearly five weeks late, almost one third longer than it should take to get a licence approved.

And for the KPI monitors that average delay will almost certainly increase – there are four applications in the Coinslot sample that are still in the system – two nearing ten weeks over time and a further two already one month over so far.

But enough sample statistics…for the moment at least.

The Gambling Commission views its performance in a very different light and one that differs quite significantly from the Coinslot sample.

Let’s hear how the regulator assesses its performance.

The Gambling Commission has not been hiding away from its performance on meeting the licensing timeline objectives of 112 days, and in a detailed response to a question in the House of Commons, the regulator answered inferred criticism over its own performance head on.

In a written letter to gambling minister John Whittingdale last month, Conservative MP Philip Davies asked: “What the average time taken by the Gambling Commission to make a determination on an application for a gambling licence has been in each of the last five years.”

The minister responded with two tables shown above.

Talking to Coinslot after the publication of these figures in House of Commons despatches, the Gambling Commission were able to put some meat on the bones of this licensing conundrum.

A spokesperson from the Commission explained: “The data provided in response to the PQ only included OL new application data. These data included complex cases and panel cases which take longer to determine. Based on the average processing times for all OL new applications determined in each year, you can see that Licensing has met the KPI of 16 weeks (or 112 days) each year apart from 2017/18.”

The response was robust, albeit slightly ambiguous, and certainly out of kilter with Coinslot’s random sample.

How then, can two statistical interpretations differ so wildly?

The Commission says 99 days to determination; the Coinslot sample says 130-145 days in many cases. It’s a large discrepancy – almost 50 percent longer – and while one can certainly not question the GC statistics, one can challenge the choice of measurement.

In representing its performance against target, the Commission has chosen timelines that are averaged out across all the operating licences processed. In its defence, average days to determination is the most convenient and simple means of calculation – the date from application to determination for all applications. It’s expected, and probably hoped, that those applications which take just two weeks will even out against those at the other end of the spectrum where one, quoted by the minster, has taken over 150 days.

But nothing’s average when it comes to gambling statistics. The devil is always in the detail – and this is where the discrepancy between the GC figures and the Coinslot findings reside.

In Coinslot’s sample – there is nothing average for the 14 out of 19 applicants. Their applications were all determined late – on average (!) by nearly seven weeks.

And here rests the real conundrum on performance. According to the Commission’s response to Parliament, 38 of the 83 applications currently in the GC system have gone over 90 days – and presumably many of those will have exceeded the 112 days timeframe.

That opens the questions: is the real test of the licensing application KPI not the average time taken to determine a licence, but the number of licences that are processed in time?

On the Commission’s current crop of applications, the law of averages (for want of a better word) suggests that a sizeable number will not meet the 16 week deadline – a generous guestimate would say a quarter.

And by Coinslot’s random survey, 14 out of 19 applications failed to meet the deadline – almost 75 percent.

Size, as they say, matters; and the size that matters in the processing of operating licences is not your average, but the number of those that are way over average.

And when nearly a third of your applications currently in the system are days away from missing the target timeline, it does make you ask: exactly how many licensing applications failed to meet the 16 week target deadline for determination?