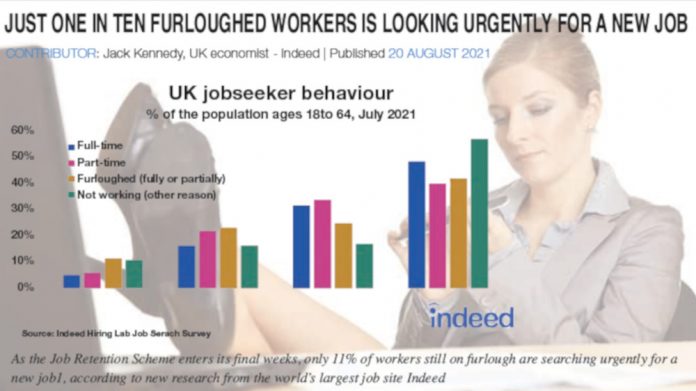 Businesses are desperate for staff as the unemployed and furloughed workers adopt wait and see strategy and are selective about what positions they apply for. The staff shortage crisis is hitting the every sector.

A new survey undertaken by Indeed, the world’s biggest job site, has provided some context to the hiring crisis being faced by many employers in the industry. A survey of 5,000 adults showed that only 11 percent of workers still on furlough are searching urgently for a new job.

Nearly three-quarters of furloughed workers not seeking a new role expect to return to their jobs when the scheme ends at the end of September. Over half (56 percent) of people currently out of work are not actively seeking a new job, while many unemployed workers are being selective about what they apply for based on the fact that they have a sufficient financial cushion.

The labour market has rebounded strongly since the end of lockdown, with the unemployment rate falling to 4.7 percent and job postings surging past pre-pandemic levels.

Indeed’s research suggests a lack of urgency among jobseekers to find a new role, even if they are unemployed or still on furlough, is contributing to the challenges facing employers.

Overall, just 7 percent of all workers surveyed, including those working full or part-time, said they were urgently seeking a new role.

Among those on furlough and not searching for work, 71 percent said they weren’t looking because they expected to return to their pre-pandemic job. Nearly two million workers were still on furlough as of the end of June, with the scheme due to end at the end of September.

Meanwhile, 12 percent of those on furlough indicated they were not comfortable returning to in person work due to COVID-19, while 9 percent believed there was no work available nearby, and 6 percent said they had caring responsibilities.

Even among those who are currently unemployed and actively searching for work, many are being choosier about the roles they apply for because they have some financial security. Around 30 percent of unemployed people who are not urgently looking for work said they had a financial cushion sufficient for some time.

Jack Kennedy, UK economist at Indeed, said: “Many employers are desperate for staff, but a significant portion of the workforce appear surprisingly relaxed about finding work, preferring to wait for more job opportunities to emerge.

“Even with the end of the furlough scheme looming, most are feeling optimistic about returning to their workplace and so are in no rush to find a new job. But with almost two million people still on the furlough job retention scheme, some may soon learn they will not be going back and will therefore need to start actively searching.

“The financial cushions enjoyed by some unemployed workers will also eventually erode, and will create a greater sense of urgency among those currently out of work but still happy to sit on the side lines. For now, amid a backdrop of robust labour demand and a strong sellers’ market, most people seem to feel they can be choosy about their next job move.”