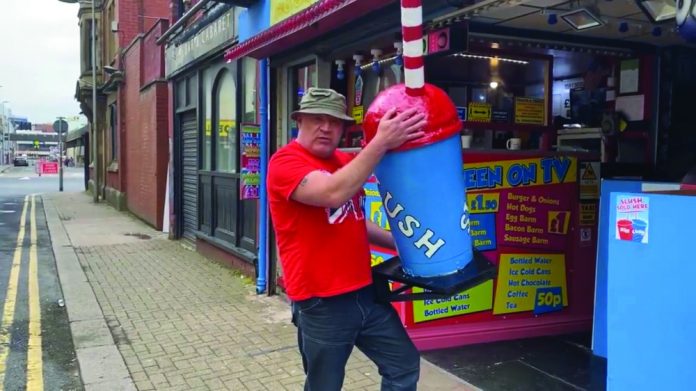 After conquering the small screen, FEC operator Chris Higgitt is conquering the even smaller screen of YouTube as he attracts video makers from across the UK to his FEC and £1 burger bar, always making sure to big up Blackpool in front of the camera.

Chris Higgitt, owner of Las Vegas Amusements in Blackpool, is becoming a YouTube sensation for his abundance of charisma and his now famous £1 burger.

In the world of YouTube streaming, more views mean more cash, and viewers cannot get enough of Higgitt’s genuine charm while he serves his ridiculously cheap £1 burgers. At least two videos of Higgitt, simply sharing his daily life, have already hit over 100k views on the video platform. The content is interesting, entertaining, but most of all, it’s authentic and unscripted – a quality that is like gold dust to YouTube viewers. Higgitt now gets people visiting from all over the country to try his economy- defying burgers, which he believes represent the best of what Blackpool has to offer.

“Blackpool is based on cheap, family values. People come in here and have good value for money. You don’t need to rip people off and charge them a fiver for a burger, charge them a pound,” he said to Lancs Live. “It doesn’t cost that much money, people don’t realise that 98 percent of Blackpool’s economy is either directly or indirectly tourism based and it’s my job, as one of the service providers, to encourage people to come to Blackpool.”

Higgitt’s no stranger to publicity, already featuring on Channel 5 and UK Gold, and he’s certainly not shy in front of the camera. But in 2021, television is old school, and while Higgitt is no spring chicken, he knows that it is social media and streamers that will really get his message delivered to the right people.

“Blackpool is a world class destination and we want you to come here and try a £1 burger. Try the £1 donuts around the corner and just have good old fashioned family values and a good time in Blackpool,” preached Higgitt, who now has the sales pitch nailed down – not just for his arcade – but for the whole resort.

“We all work together in Blackpool and when people come and visit it’s like they leave their usual life and enter a soap opera,” he concluded. “They get to know us and there’s always things going and things up keep up to date with.”

And for this reason, it’ no surprise that there are plans in the works for an actual soap opera based on Blackpool businesses including, of course, Higgitt’s world-renowned £1 burger.