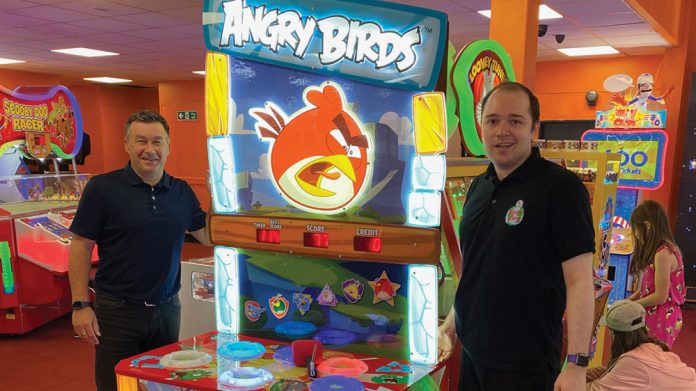 Described as “the best money taker this season” and “the best income hammer game onsite”, Angry Birds Whacker Game has been praised by FEC operators for its winning theme and eye-catching features. Harry Levy’s Geoff Spencer explains why.

Angry Birds Whacker Game by Harry Levy Amusements has been helping FECs make the most of a bumper season, with operators heaping praise on the machine for its cashbox-filling features.

Described as “the best money taker this season” and “the best income hammer game onsite”, the colourfully decorated cabinet has made a fine addition the the arcade floor in Clevedon Amusements in Clevedon and in Marcus Kravis’ The Arkade in Minehead.

Tyler-Paige Harvey from Clevedon Amusements went one further, calling the Angry Birds whacker “the best money maker this season”, and adding that the theme – which has proven itself to be strong in the past – is still “a winner”.

When asked by Coinslot why the Angry Birds whacker was doing so well this season, Geoff Spencer from sales at Harry Levy, explained that it has managed to “just hit the sweet spot that creates outstanding income”, aided by an “eye-catching licence, great sounds, and colourful visuals”.

Indeed, most manufacturers would describe creating successful FEC machines as an art, rather than a science, with the Angry Birds aesthetic cleary evoking strong feelings from visitors as they return to their favourite FECs. Spencer stressed, however, that a diverse range of different machines across the FEC is key to a successful overall picture, including not just pushers, redemption, and video games, but also virtual reality.

“Its all about variety,” he said. “Pushers are the backbone of most arcades, and Harry Levy’s evergreen 6 player Butterfly pusher is proving as popular as ever. The large range of Baytek redemption products are also still in demand, with new titles arriving, now on test for the 2022 season. With virtual reality, VR Shark has proved to be a giant killer, this economically priced VR game is out performing some of the bigger titles available on the market.”

And Harry Levy’s UK manufactured machines have become even more competitively priced since the global increases in haulage and shipping costs, which have affected almost all imported games and parts – although the price of Angry Bird Whacker Game remains unaffected.

“The horrendous increases are yet to show any signs of a return to any normality,” detailed Spencer. “Like other suppliers we have unfortunately had to make some increases on imported games, although we have absorbed this increase on the Angry Birds Whacker.”

Spencer added that stock of the Angry Birds hammer game is available for immediate delivery, and that prices of UK manufactured pushers also remain unaffected, concluding that the “best way to beat the increase is to buy UK manufactured games!”