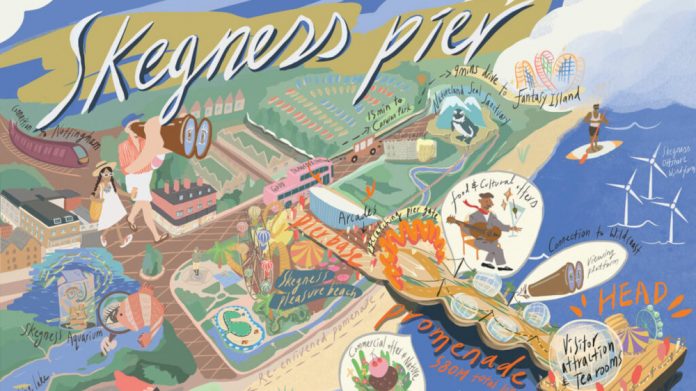 The Mellors Group has announced in detail its proposals for extending Skegness Pier, unveiling a series of public consultation boards outlining the concept and vision behind turning the attraction into an “all year round destination.”

Alongside a potted history of the 140-year old landmark, the boards feature a range of bold design proposals, as well as imagery of the international projects that have inspired plans, including the Eden Project, and New York’s Highline.

“We want to restore the pier to its original 582m length and create a safe new public space, bringing the natural beauty of Lincolnshire’s wild coast into the heart of its premier resort town,” states the proposal.

“We’ll create a new hospitality hotspot and meeting place for locals and visitors, develop an exciting new visitor attraction, and make the pier once again a landmark attraction famous for all that is great about the traditional seaside resort holiday.”

Influenced by the Highline, the boardwalk extension will include inset planting at floor level, featuring hardy local plants such as coastal seagrasses from nearby Gibraltar Point, the Rimac and Donna Nook.

Domed geodesic shelters will line the pier, allowing visitors to enjoy “the famous bracing air of Skegness and panoramic views of the coast all year round,” while the new pier head will feature boat trips and family entertainments, an “exciting and educational” visitor attraction, a viewing platform, and “a modern take on the traditional tea room.”

On the existing landward end, a new “eyecatching” entranceway will be created, as well as a number of environmental improvements in line with the project’s overarching focus on sustainability.

Local residents are invited to contribute their thoughts on the proposals via Skegness Pier’s website, while public consultation meetings will continue to be held at the Playa at the Pier bar throughout August in order to gauge public opinion. “Your opinion matters,” added a spokesperson. “Please complete our short questionnaire and let us know your thoughts.”