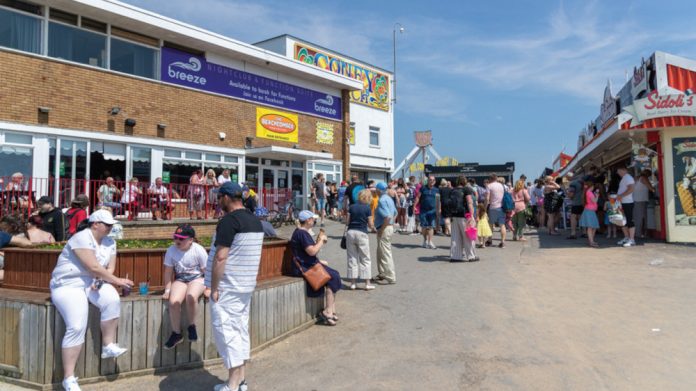 Porthcawl is busier than it’s been since the 1980’s, according to resort stalwart Paolo Sidoli, managing director of SB Machines, who has had to take special measures to recruit and keep staff to service the 2021 summer boom.

The seaside sector is buzzing according to SB Machines MD Paolo Sidoli who has seen his operations and catering business in Porthcawl flourish since 19 July – but recruiting staff remains an issue.

The children’s ride manufacturer said fine weather over the school holidays, restrictions on international travel, and the working from home phenomenon has led to a visitor boom.

“We have noticed a new demographic of clientele, slightly different spending patterns, and people staying out later,” he told Coinslot. “The less frequented areas of the town and beaches are attracting more visitors while the more traditional hotspots are getting congestion at London levels – something we have not seen since the 1980’s.”

Recruiting new staff, however, has still been a challenge, with the entire industry struggling due to a perfect storm of Brexit, Covid, and an underappreciation of hospitality staff.

“Gradually and over many years it has become increasingly difficult to recruit and maintain competent, skilled staff,” explained Sidoli. “Unlike many other European countries, the UK does not value or appreciate personnel who work in leisure, catering and hospitality.”

Last year, Sidoli decided to take the situation into his own hands. He took a lot of time to recruit and train staff to a high standard, paying them accordingly and adapting their work schedules to suit their needs.

“This investment of our time and resources has rewarded us with a good balance of staff over the summer months and beyond,” he detailed. “We reluctantly accepted that full time staff in these sectors could not and would not sustain working every weekend during peak periods. We adjusted rotas and filled the spaces with temporary but well trained staff. Wages have increased but so have prices to the customer.”

Indeed, Sidoli’s lesson from this experience is that if “you give exceptional levels of service and do not compromise on the quality of your offering, the customer will pay the extra premium and will come away delighted with the experience offered.”