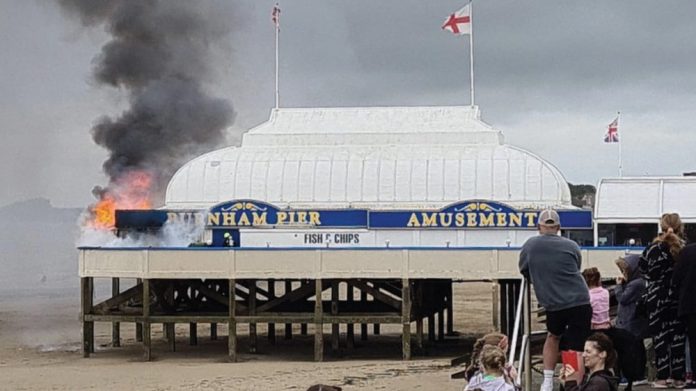 The UK’s shortest pier caught fire on Thursday last week but was back open by Sunday, with owner J Holland and Son crediting a quick response by firefighters as there as on “the whole building didn’t go up” in flames.

Burnham-On-Sea pier reopened on 8 August following the completion of a clean-up operation after a fiery blaze erupted from the Pavillion only four days earlier.

The UK’s shortest pleasure pier was fully reopened for business on Sunday morning, with just one small section of the interior closed due to fire damage in the roof. Its amusements arcade was left largely unscathed, with only a few machines closed off to visitors.

In the days after the fire, several skip loads of charred debris were removed from the back of the building to enable it to reopen. The landmark’s iconic dome also had to be patched up to make it weather proof ahead of forecasted storms.

Duncan MacDonald from Pavilion owners J Holland and Son told local news outlet Burnham-On-Sea.com that the clean up had progressed well, thanking firefighters for their efforts in keeping damage to a minimum.

“Our thanks go to the fire crews for their quick response and amazing work to ensure the whole building didn’t go up. We can’t praise them enough,” said MacDonald. “Fortunately, noone was hurt, and the damage has been constrained to one corner of the building. There’s some water damage inside, but that damage wasn’t severe – it could have been far more serious.”

“A big thank you also goes to the local community and all those who have passed on their well wishes since the fire.”

Firefighters were called to the pier at around 12.30pm on Thursday 5 August after passers by witnessed smoke and flames billowing from the rear of the building, an area that is used for storage by the operator. The flames gradually spread to part of the dome, but the fire services’ work stopped it spreading and causing further damage. While crews were quickly on scene with water jets, high winds threatened to spread the fire, which was eventually extinguished by around 1.30pm. A fire service spokeswoman said its investigation into the blaze had found that the cause was undetermined, but not suspicious.