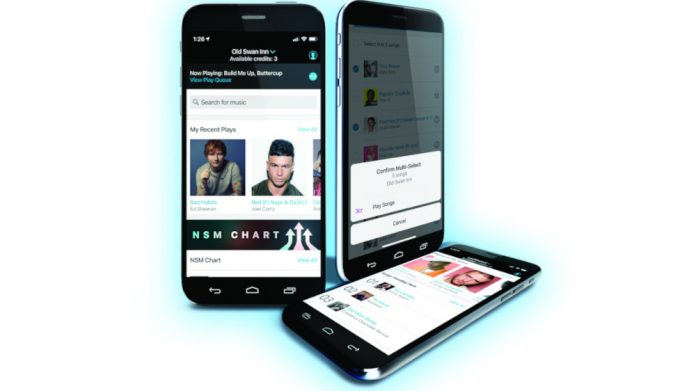 Designed to get more users, more engagement, and even more jukebox revenue, the NSM Music app has been launched by the jukebox manufacturer to replace its My Jukebox app.

Jukebox manufacturer NSM has announced the release of its all-new mobile app, NSM Music, which brings new features, a faster process of selecting music, and an emphasis on boosting jukebox revenue.

Replacing the company’s My Jukebox app, the NSM Music app has been given a brand new design to make it appealing to all demographics.

“We have modernised the app to appeal, not only to Millennials and future generations of pub goers, but to the older generations too,” said NSM sales manager Alex Kirby in an announcement to operators. “The new look and feel is similar to the heavily downloaded and highly popular music apps such as Apple Music, Spotify, and others.”

While the feel may be similar to the world’s most popular music streaming apps, NSM Music requires different features and functions to perform as a jukebox app, many of which have been added after NSM listened to feedback from its operators and their customers.

“We’ve addressed ‘wish list’ items that our customers have been requesting for a long time, as well as more features that app-users will be excited to experience,” added Kirby.

One change that users will feel straight away is a simplified onboarding process, which Kirby said will make it much easier and quicker for new users to get signed up.

“We’ve also made the process of selecting music faster and have implemented features to customise the jukebox music experience for each user,” he continued.

Importantly for operators – many of whom have had their business disrupted over the last 18 months – NSM has also implemented features that will drive jukebox revenue.

The new app is currently available on iOS and Android in the associated app stores, with the old My Jukebox app no longer connected to jukeboxes and removed from stores. Users with credits remaining in their My Jukebox app account will be notified on how they can redeem their credits in the new NSM Music app.