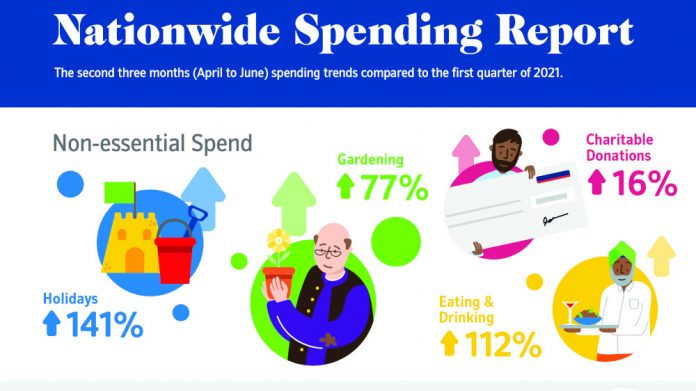 The easing of Covid restrictions has coincided with a loosening off people’s purse strings, according to data from Nationwide’s latest quarterly Spending Report that shows both essential and non-essential spend have soared.

The amount spent on non-essential items, including leisure and entertainment, soared during the second quarter of the year as consumers enjoyed their new-found freedoms.

According to the Society’s latest Report, more than £22 billion was spent by Nationwide members during the second quarter of the year as inflation jumped to 2.5 per cent in June. This is based on the 566 million transactions made by members between April and June – a 20 per cent increase on the number made in the first three months of the year.

More than 150 million non-essential transactions were made by Nationwide members between April and June (up 73 percent on the first quarter of the year) equating to around £4.6 billion – a 60 per cent increase in spend versus January to March. Holidays saw the biggest increase in the number of transactions, marking a 288 per cent increase to 3.1 million compared to the first quarter of 2021.

And with staycations very much in demand, spending on campsites and caravan parks went up by 139 per cent to £69.5 million compared to the previous three months. The 500,000-plus transactions recorded make up around one in seven (16 percent) of all holiday transactions.

While the number of transactions made on hotels and resorts increased in the second quarter to 1.8 million (compared to 353,000 in January to March), it is still much lower than the number made in Q1 2020 (2.25 million).

£269.4 million was spent on leisure and recreation in the second quarter of the year – an increase of 108 per cent on January to March, with the number of transactions increasing by 113 per cent to 7.93 million.

As restrictions have begun to ease, more people have started to eat and drink out once again, with the number of transactions between April and June (75.7 million) increasing 100 per cent on the first quarter of this year. This equated to a total spend of £1.05 billion in Q2 (a quarter-on quarter increase of 112 per cent). The average value of each transaction has also increased slightly from £12.87 in April to £14.43 in June.

The number of transactions in bars and pubs reached 9.39 million in the second quarter of this year. This is nearly back to where it was prior to the first national lockdown in March last year (9.56 million transactions in Q1 2020).

The boom in contactless payments, particularly via mobile, generated as a result of the pandemic, has continued. Between April and June, more than 58 million transactions were made using mobile payments, such as Apple Pay and Samsung Pay. This is up 70 per cent on the first three months of this year and a 191 per cent increase on the second quarter of 2020.

The number of transactions using contactless cards in store has increased by 48 per cent (189.9 million) on the January to March period this year.

Mark Nalder, Nationwide’s Head of Payments, said: “As the country reopens, our latest quarterly Spending Report suggests that consumer spending is following suit as people loosen those purse strings and start to enjoy getting back out there.

This yearning for a sense of normality, combined with a successful vaccination programme, is perhaps what is driving spend upwards – with a significant increase in holiday spend a prime example of this. The feeling of a brighter future is perhaps acting as a catalyst for wider increased spending, from charity donations to seeing friends again – all of which is keeping the tills ringing. “The pandemic has seen a surge in use of contactless, particularly via mobile phone, and it’s clear from our latest data that the switch to tap and go is here to stay, even when shopping in store.

“As we move deeper into summer, we expect non-essential spending to continue edging up as people look to enjoy their freedom using some of the savings built up during lockdown to help boost the economy.”