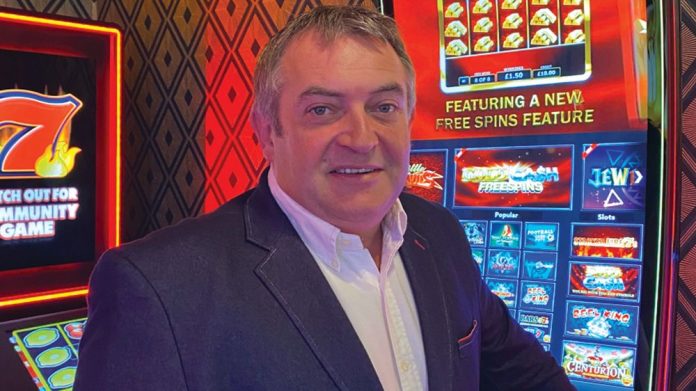 Jason Frost has been reappointed President of EUROMAT and the former Bacta National President wants to waste no time implementing what is an ambitious pipeline of initiatives and campaigns.

Coinslot: You must be flattered to be invited back as President unopposed – reflecting on the last two-years what would you say have been the highlights and what are you most proud of?

Jason Frost: Of course, it was very pleasing to be invited back for what will be my third term. It’s important to recognise that leading EUROMAT is very much a team effort and as well as myself the team comprises Vice president Uwe Christiansen and Treasurer Sanne Muijser. In terms of the highlights of the last term as President I would point to an increase in both country and corporate membership, the presentation EUROMAT made to the Gambling Regulators European Forum (GREF), the research project we contributed to with the Universita di Roma into FECs and the work we continue to do to explain the workings and nuances of the industry with the Head of Gaming at the EU and the Financial Crimes Unit in relation to bricks and mortar gaming and the scope of the Anti-Money Laundering Directive. Like every other organisation COVID has meant that we’ve had to put a temporary brake on a lot of the activities that we had timetabled for 2020/21 and which are still in the pipeline.

Coinslot: Does it help that you are very much a hands-on owner operator?

Jason Frost: Yes, I think it does and it’s relevant on a number of levels. Firstly, it means that when I’m explaining how important it is for gaming to have access to alternative payment methods, I’m doing so not just from a theoretical or philosophical basis. As an operator I can see that people are carrying less and less cash and using their debit card to get money from the ATM and play on our machines. I speak to my customers every day so I know the mood music and their attitudes towards key issues. Also, when I’m talking with regulators many of whom have never been inside an arcade, I know that they appreciate the insight that I can provide from working at the coal face. With due respect to my good friends and colleagues in the legal profession, lawyers can only tell you so much: it’s vital, in my opinion, to get underneath the finger nails of the industry, to understand the industry and one of the best ways of achieving that is by speaking with operators and if the operator happens to be part of the EUROMAT leadership team even better!

Coinslot: Who is eligible to join EUROMAT – is it an organisation purely for trade associations?

Jason Frost: EUROMAT was formed as an organisation representing the needs and business objectives of the European-based trade associations but over a period of time we have expanded the membership community to include what we term Corporate Members. This is an area of EUROMAT that I am particularly keen to develop and grow. Our Corporate Members comprise organisations including Lowen Entertainment, Faro Games, MERKUR Group UK, FEC Netherlands, JVH Gaming and Entertainment Group, MERKUR Gaming and Novomatic UK. Our Corporate Members benefit from a range of networking opportunities and the access that EUROMAT membership brings to understanding the decision making process in Brussels and the workings of the European Union. Our head office is based in Brussels and having access to our Public Affairs consultants and their insight to European Law is extremely valuable. Our core trade association membership is drawn from Austria, Croatia, Germany, Ireland, Italy, Montenegro, Netherlands, Romania and Britain. This represents a total of 13 trade associations. Pre-COVID EUROMAT staged its meetings in different countries which were hosted by the member association which in-turn invited political figures and dignitaries. SAPA, the Italian trade body, hosted EUROMAT and its Rimini trade show for example, and it’s a great way to engage with the most influential personalities in the European industry.

Coinslot: What’s on the EUROMAT agenda – short, medium and long-term?

Jason Frost: Obviously, these represent broad brush stroke answers, but short-term it’s all about hastening the safe, secure and sustainable return to business post-COVID. Throughout the pandemic we have been active sharing the various experiences of our members and this process will continue. Medium-term we need to be at the forefront of the debate regarding how urban areas rebuild and reinvent themselves. COVID has been a disaster for the land-based sector, but as towns and cities throughout Europe prepare for the future there is an important role to play for leisure-based businesses and EUROMAT intends to contribute to that debate. In terms of the key regulatory issues, the ability to offer players alternative payment methods is paramount. Economies are moving away from cash, they may be travelling at different speeds, but the direction of travel is the same. Without alternative payment methods there won’t be an industry left. Long-term I think we all have to prepare for future pandemics, how the industry will respond and what gambling regulations need to be in place to help the industry.

Coinslot: Social Responsibility is at the top of the agenda for many gaming businesses and organisations – what’s EUROMAT doing in relation to safer gambling?

Jason Frost: I’d like to think that EUROMAT was ahead of its time when it produced its ‘Playing Fair’ document which showed the undertakings made by members in terms of delivering socially responsible and safe gambling. We are in the process of bringing ‘Playing Fair’ right up to date and introducing an accreditation process for EUROMAT trade association members to cascade through their own memberships. Safer gambling is absolutely the right thing to do and EUROMAT intends to lead from the front on this.

Coinslot: What are the biggest challenges facing EUROMAT and its members?

Jason Frost: I would say the biggest challenge is addressing the ignorance that exists amongst policy makers and politicians about our industry. Without the intervention of EUROMAT there’s every chance that the street market would be considered to be at high risk of money laundering simply because the Financial Crimes Unit believed there was widespread use of FOBTS in Britain when in fact the reduction to a £2 stake had all but removed the genre from the high street. Similarly, in some parts of Italy it’s federal law to prohibit Under-18s from playing FEC products, including, would you believe Air Hockey and Kiddie Rides, which makes no sense and undermines the profitability of Family Entertainment Centres. EUROMAT’s role is to get in front of the regulators and to explain and improve the level of understanding among regulators. As one of our members said the problem with the industry is that ‘innovation has become regulation’ and when that happens a sector which is all about delivering harmless fun and entertainment becomes a target for the law makers.