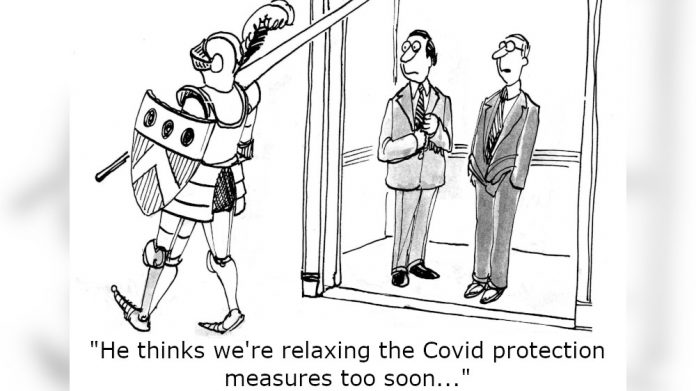 Time to confront the antivaxers

Do we really have to tolerate the intolerant?

Conspiracy theories exist, the saying goes, only because those in power and those with something to lose have and continue to conspire.

This self-fulfilling philosophy can be used to justify any and every bizarre or outlandish theory amplified and supported by thousands of anecdotal pieces of evidence (sic) available via the most cursory of internet searches.

Historically the conspiracy theorists confined themselves to eccentric claims concerning phone masts, UFOs, the Bermuda Triangle or how Princess Diana came to die in a Paris car crash. In 21st century Britain the conspiracists’ ire and energy is directed at preventing the roll-out of the vaccination programme, variously claiming that it’s a tool of the world elite, that Covid is a hoax, that it was orchestrated and that the vaccines are a means of social control.

Sowing seeds of doubt about the vaccines amongst sections of the population has been punctuated by acts of violence and intimidation.

The anti-vaxxers as well as manhandling Chris Whitty, England’s chief medical officer in central London, have gathered outside his home chanting ‘murderer’ and ‘traitor.’

The danger is not just that they are a threat to public order and public safety but that by mobilising large demonstrations and by gaining the oxygen of publicity they contribute to a mood of vaccine hesitancy.

With seven of Europe’s top ten infection centres being in the UK it’s clear that anything that threatens the comprehensive immunisation of the population threatens the recovery and heightens the risk of new and even more dangerous variants coming to the fore.

Now’s the time to stand-up to the anti-vaxers and show some conviction in confronting those who endanger health and threaten the recovery.

If you want to lockdown, then you lockdown

There was a surprising kickback from some quarters to Boris Johnson’s determination to remove Covid restrictions this week. And it seems to be coming from people rich enough to be able to afford their principles.

No one has been more critical of Boris Johnson and the government’s handling of the Covid crisis than Coinslot.

Their response has been uneven, inconsistent and off target when it comes to business, and especially the smaller companies in the supply chain.

However, what Boris Johnson has got right – well, as right as he can given his propensity to shy away from really crucial detail on self-isolation and face masks rules – is the desperate need to relax Covid restrictions as soon as possible.

July 19 cannot come soon enough – and yet, at a press conference signalling his intent to meet that deadline, there was a real sense of resistance from some sections of the media that the relaxation is too soon.

Well, the message these journalists weren’t hearing – or simply ignoring – is that it won’t be soon enough for thousands of hospitality businesses, their crucial supply chain, customers and employees, many of whom want the security of getting back to work.

For businesses who have received little government support and have increased their debts in order to stay in the game, the questions of too soon, from somewhat privileged journalists whose livelihoods have not been on the line during Covid, is a little insulting to our businesses and out of step with a large contingent of the public.

Coinslot remains a champion of the national media; it does a fabulous job in holding our politicians to task. But there was a sense at last week’s press conference with Johnson, and after with Sajid Javid, that some commentators were not posing questions but rather pushing their will for a delay to relaxation.

And that’s absolutely not fabulous.

It’s easy to advocate a continuation of restrictive measures when you’re rich enough to afford it. And in many cases in that press conference, these questions were being ‘asked’ from the luxury of a six-figure salary and a good contract with a broadcaster.

Lockdown doesn’t affect those journalists – they can afford to lockdown, because they’re still getting paid – and handsomely so.

But for so many businesses, that’s not the case.

So, to hear a series of journalists talking about how it’s too soon to relax restrictions, when not to could mean the end of many families’ income and many businesses’ existence, is arrogant to the point of irresponsible.

After 16 months of restrictions and the stress that has brought to many businesses in our sector, it prompts a simple solution: if you want to lockdown, then you lockdown.

The hospitality sector wants to, and needs to open up on July 19.

It’s been a good few weeks for the travelling Ayers family as daughter Milly celebrates her offer of a place at Oxford University. Milly, a superb ambassador for the Showmen sector, will study classics at St John’s College having spent much of her early teens teaching herself the highbrow subject.

She becomes the third person from the travelling community to earn a place at Oxford and has won huge praise from around the industry on social media. And it’s more than well-deserved.

Not Oxford University, and not an Oxford intellectual – we assume (!) – but a significant honour nonetheless is bestowed on industry stalwart Jason Frost who was elected to the post of President of Euromat for another term.

Already four years into the office, Jason will serve two more years keeping a British vision at the heart of Europe.

Not so much acclaim, however, for the Gambling Commission whose performance on licence applications, highlighted in Coinslot this week, is a pretty poor one by every measurable standard.

New interim chief executive Andrew Rhodes has his work cut out turning that ship around – and the tide is turning against him. The Betting & Gaming Council has called for a gambling ombudsman; which might come in handy if its remit was extended to dealing with complaints against the regulator itself.

Someone has to hold the Gambling Commission to task and ensure it respects the industry it’s there to regulate, not least when it takes 29 weeks to process a licence, and worse when it can’t determine a policy on a government initiative from 14 months ago and that is now no longer on the market.

And, if only this was ever possible, that someone might also want to examine how the government feels this performance merits a 15 percent increase in licence fees.

Now that really would be proper regulation all round.