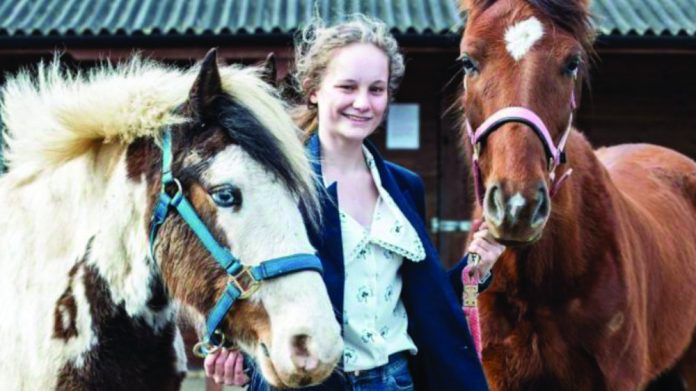 Showman Milly Ayers has become the first student from a travelling family to win a place studying Classics at Oxford, hailing the prestigious place as “a win for the entire fairground community.”

A showman from Chertsey has become only the third student from a travelling family to win a place at Oxford, having taught herself Classics after leaving school at 13.

Milly Ayers, who has worked on fairgrounds since she was three years old, will join St John’s College this September, and hailed the news as a victory for Showmen.

“My success is a win for the entire fairground community, and if any good comes out of that, I’ll be over the moon,” Ayers told the Oxford Mail.

“Perhaps while I am there I can show people that showmen and travellers in general aren’t these stupid Neanderthals like the stereotypes suggest.”

Ayers was raised as part of a traditional travelling Showmen family, and spent most of her childhood helping both her parents and grandparents operate rides, strikers and food stands.

Despite attending primary school, Ayers – who has autism and Asperger’s – found that the secondary school system was not “a good fit,” and left school in order to give herself an education beyond the state syllabus.

“It wasn’t a traditional education by any means, it was very flexible, but I suppose because I’d always had that love of education, of learning, I was able – with the help of my parents and everything – to find a way that suited me.”

Over the next three years, Ayers taught herself the GCSE syllabus by studying books, watching documentaries, and visiting museums and historical sites, and though she dismisses the grades she achieved as “pretty average,” her studies allowed her to pursue A-Levels in English, History and Classics at college.

With higher education a long-time goal, Ayers then looked to Oxford, and found support through mentoring organisation Zero Gravity – which paired Ayers with a Cambridge PhD student during the admissions process.

“I’m really excited to be able to go and learn there,” Ayers told Steph McGovern during an interview on Steph’s Packed Lunch. “I think it’s a good opportunity not just for me but for the entire Showmen community, to put our voices out there and show that we do exist, and we are capable.”

Milly Ayers made her national TV debut on Channel 4 recently explaining life on the road and her self-education journey to Oxford University.

“It’s a good opportunity to put our voices out there,” she explained to a live audience. “We’re a community, now recognised, and I want to try to educate people about who we are.”

Well, Milly is an intellect who decided to leave school at 13 due to autism and went on to pursue her ‘love for the ancient world’ by studying classics.

From the age of three, she has lived the fairgrounds, travelling the country opening up and down working the markets and fetes.

“We’re primarily businessmen,” she explained proudly. But education, and a switch to one of the world’s top five universities, has drawn the fairground teenager.

But it hasn’t all been comfortable. That journey, she explained, has included insults and signs daubed outside the yard her family live in.

But she’s going to work on that: “That’s what I want to change,” she confirmed.

And no doubting she will. An engaging character, Milly has attracted a wave of support from the travelling community and beyond. Her blog, Antigine Journal includes a Showman’s Odyssey, and her Channel 4 interview drew widespread plaudits: “So inspiring and a fantastic representation of our community”; “You’re a credit”; “a wonderful advert for showmen and women.”