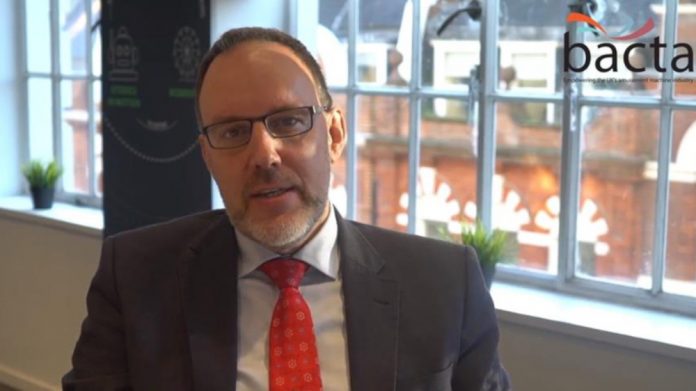 Bacta CEO John White understands the sense of relief and simmering anger following last week’s First Tribunal’s decision backing the industry in the 20 year battle over VAT on machines. However, it’s the delay in giving businesses their money back – notwithstanding the two decade legal wrangle – that’s “unconscionable”.

John White: Assuming everything ultimately remains in favour of the tax payer, then the whole industry potentially will get its overpaid VAT back, although businesses will have to have a protected claim stood behind the case.

That is still an awful lot of companies.

John White: It has been one of those things just hanging around in the background.

Most businesses have simply got used to the fact that the litigation has been crawling through the courts and any assumptions about winning or losing long dispensed with.

There was an almost que sera sera attitude.

That is not to say people were not interested in the outcome – for some there is a lot of money at stake – but rather the snail’s progress of litigation meant that they had to get on with running their businesses and let the case take its course.

White calls HMRC out for delay in repaying VAT monies: “If the boot was on the other foot, Bacta members would be in jail for non-payment!”

That is what the courts are there to resolve and to be fair, we are not the only sector or company that sees the world differently to HMRC.

One look at the FTT and UT case list will tell you that. However, this does catch the eye as the payout is of such magnitude and that probably explains why HMRC fought this one all the way to the Supreme Court and back.

What has been so disappointing, and in my view unconscionable, is the delay HMRC have instigated in paying out on pre 2005 claims from the first of the VAT cases in this area.

If the boot was on the other foot, Bacta members would be in jail for non-payment!

John White: I can understand absolutely the anger impacted businesses are feeling and if natural justice was done, compensation should be paid.

John White: I think there is a danger of believing these sorts of cases are exceptional.

Tax law is highly complex and there is plenty of room for disagreement over the finer points of law and practice which can have a large financial consequence.

Determining whether a jaffa cake was indeed a cake or a biscuit was I doubt ever in the mind of those that constructed the VAT legislation, but it was a very real world issue that needed to be resolved through the Tribunal system.

As was the correct VAT treatment of amusement machines takings.

There has been nothing particularly unusual in the way this case has been handled and I frankly can’t see any alternative.