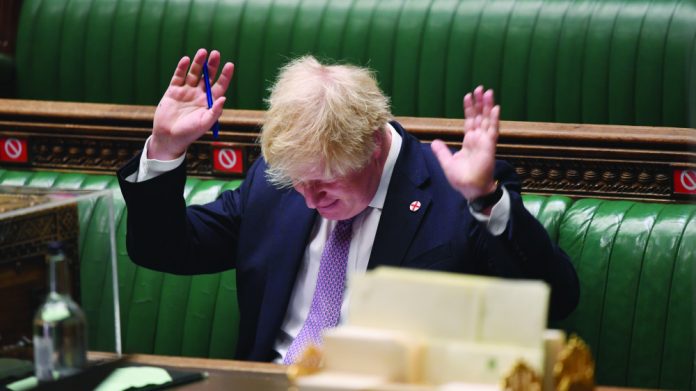 Why it’s impossible to escape the football, Johnson’s big gamble, the inexorable decline of the high street and how Coinslot chimes with the Mayor’s Office. All topics covered in this week’s Off The Record.

A GAMBLE – BUT A GAMBLE WORTH TAKING

There’s an unauthorised biography of Boris Johnson which has the title ‘The Gambler’ and many commentators and critics have described the details of Freedom Day as representing a huge gamble.

I haven’t been afraid to criticise the PM and there’s no doubt that when we review how the country has responded to the pandemic, his actions and unpreparedness will not escape forensic scrutiny.

However, on this occasion I find myself agreeing with the thinking and the logic that lies behind his decision. Despite the exponential rise in infection rates, the vaccine has broken the link between infection and hospitalisation. Schools are soon to breakup for the summer, the weather should allow us all to spend more time outdoors and the vaccination programme continues at a pace. Boris Johnson is correct – if we don’t open up now and enable businesses to brush away the cob webs of enforced inactivity when can we?

Most, if not all of the scientific community are urging more caution wanting to see the infection rates drop rather than sky rocket, before we open-up. The danger with this approach is that we will edge closer to autumn, followed by the difficult winter months and the recovery will be kicked into the long grass of Spring 2022 – two years after the first lockdown.

Gamble or Calculated Risk – this has to be the correct strategy for the country to follow. Added to this there’s the very practical issue of policing any restrictions. The population has had its taste of Freedom and it tastes good!

OUR INDUSTRY CAN FILL THE GAP ON THE HIGH STREET

I can remember the time when GAP was the fashion brand of choice for many people providing understated Californian laid back cool for both men and women.

GAP, which arrived in the UK in 1987 confirmed the end of its relationship with the UK high street when it formally announced that it would close all of its’ 81 shops by the end of the year as it takes the brand exclusively online. As one commentator said the decision represents another nail in the coffin for the high street and one that’s rich in symbolism. Is the decision by GAP to close all of 81 of its shops another body blow for the high street.

GAP is the latest casualty of the pandemic following bellwether names such as Debenhams and Topshop. The retail analysts will explain the demise on a host of reasons including price, failure to keep pace with the needs of modern consumers: the list of explanations goes on and on but the bottom line is that we are left with high streets where, in some instances the number of boarded-up vacant commercial premises are outnumbering those that are open and ready for business. A decrepit high street is no good for anyone and the demise is becoming a big political issue – after all, every MP has high streets in his/her constituency, retailers whose shops have either failed or are failing and constituents who have lost or are in danger of losing their jobs.

This industry can play an important role in helping to resuscitate the high street and we need to be a voice in the debate.

Let’s see a blueprint for recovery coming out of the industry and let’s lead the debate and provide a vision for a leisure-led recovery.

GREAT FOR THE COUNTRY – CRAP FOR BUSINESS

I’m not a huge football fan but I am patriotic.

England’s success has been great television and like everyone else in the country I have really enjoyed watching the national team do so well, led by someone with integrity (I hope our politicians have been taking notes!).

We’ve been shutting at 8pm because there’s been absolutely no point in keeping open when the games are on. I don’t say this often but you can stuff business (for the moment) – Come on England!

There’s a lot of speculation and finger pointing within the Conservative Party that the PMs initial support for his former Health Secretary, the newly infatuated Matt Hancock, was the reason why the party failed to win a seat that many, myself included, thought they would win. In the event, Kim Leadbeater retained the seat for Labour with a wafer-thin majority of just 322 votes.

While it’s convenient to be able to point to the scandal that forced the resignation of Hancock the weekend before and Boris Johnson’s super glib dismissal of his Minister’s indiscretion as being of little or no consequence, I think the emotional connection of Kim and her sister Jo Cox who was murdered by a right-wing maniac in 2016, was more of a factor.

What’s of more fundamental interest is how on earth the Labour Party can claim victory by such a small margin as a turning point in the leadership of Sir Keir Starmer, a leadership that has succeeded in disappointing even his most ardent supporters.

Retaining a seat that should be part of Labour’s heartland is not a reason to break open the bubbly – in my opinion.

YOU READ IT HERE FIRST!

Clearly Coinslot’s Off The Record column is more widely read than you might expect.

In a recent edition we asked why the authorities didn’t adopt a more imaginative approach to the very real challenge of getting people to have the jab.

Well, it seems that someone in Sadiq Khan’s office has been thinking along similar lines.

Londoners who sign up for their first Covid jab are being offered the ‘golden opportunity’ to win tickets to the Euro 2020 final.

One pair of tickets for Sunday’s final at Wembley is up for grabs as well as 50 pairs for the fan zone in Trafalgar Square.

It’s a bit like any public health message – whether it’s encouraging people to give-up smoking or reduce their alcohol intake – you need some creativity in your messaging which means more carrot than stick! Clearly, great minds think alike!