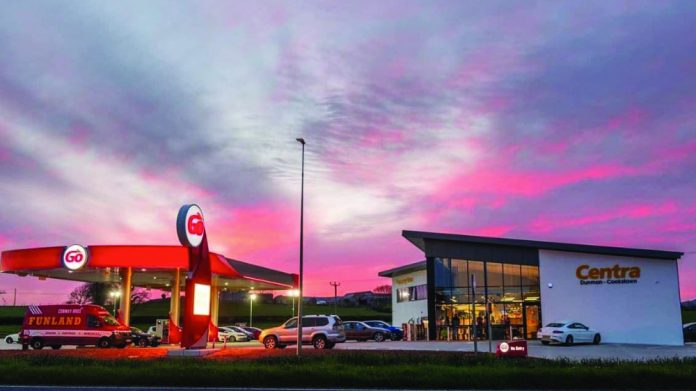 Northern Irish amusement operators the Conway Brothers have expanded into new territory, with a 2,000 sq ft retail and petrol station in Cookstown.

Northern Irish amusement operators the Conway Brothers have entered the world of grocery retail, with the opening of Centra Dunman, a new petrol station and food store in Cookstown.

Peter, Daniel and Declan Conway, whose family operates Funland centres in Newcastle, Portrush and Bangor, opened the site in April – and are already looking at expansion.

“Identifying an opportunity to redevelop the large plot and realise its potential, the brothers decided to take on the challenge with invaluable support from their extended family circle,” reported the Belfast Telegraph.

“The move has rapidly paid off, with Centra Dunman reaching its sales projections for five years on mere weeks after opening in April, while also by chance garnering the honour of the 100th Centra store to open in Northern Ireland.”

The site, which the brothers owned as part of their property portfolio, had previously been an under-performing petrol station, with Peter Conway saying “we knew the size of the site wasn’t being utilised.”

“There was another station here and it was stuck right bang in the middle. It didn’t do the site justice.”

The brothers sought planning permission to re-site the retail unit in the corner of the plot, freeing up space for parking, an expanded forecourt, and delivery access, and once approved, completed construction on the 2,000 sq ft double-height store in 18 months.

“The reason we went for double height in the shop is we thought it adds a presence and the site markets itself in a way.”

“People are curious when they go past, think it looks nice and want to call in. Spending that bit more on the building to make it look more attractive, I think will bring more sales in off the back of it.”

Musgraves acts as retail partner for Centra Dunman, while the forecourt partner is LCC Oil’s GO brand, each contributing to the £1.4m build costs.

“We’re young and hungry, and I can envisage us going on and up,” added Peter Conway. “Once you’re into retail, opportunities seem to arise and we’re willing to push on and go again.”