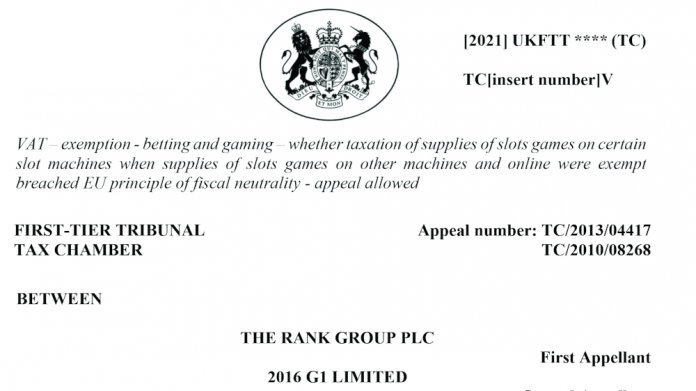 For over two decades – and maybe closer to quarter of a century – the industry and HMRC have been playing VAT ping pong through the courts and through their banks accounts in a fierce battle over tax due on S16/21 and S31/34 machines. The industry defence, driven by Rank Group through countless court cases over this period, entered the final straight last year when the Upper Tribunal sided with the industry for claims made pre-2005. This week, the First Tribunal followed suit for the period 2005-2013. HMRC must pay the VAT back to businesses across the industry.

There are 56 days to a new freedom day; the day the industry will be free of the 21 year war of attrition with HMRC over VAT monies due – or not, now according to the First Tier Tribunal – on S16/21and S31/34 machines.

The long awaited decision by Judge Greg Sinfield came late yesterday and it followed the conclusions made in April last year by the Upper Tribunal in a separate case, that VAT was not due on machines between 2005- 2013.

“Treating Taxed Games and Exempt Games differently for VAT purposes during the Relevant Period breached the principle of fiscal neutrality,” Sinfield said in his conclusion. “For the reasons given above, the appeals by Rank and G1 are allowed.”

These words will ring around the broad based gaming industry; covering eight years of VAT payments from literally thousands of businesses – the applications for repayments will be vast.

But the industry needs to hold its horses just a little. HMRC has 56 days to appeal the decision. That, however, seems unlikely given the fact that Customs & Excise decided not to appeal last year’s ruling which had focused on the VAT battle up to 2005. And in this latest hearing, having presented the same defence, an about-turn would probably be unsuccessful.

The tenacity of Rank Group throughout this battle will be marvelled at by many in the industry. At the time, pre-online explosion, Rank were the gaming giants with the only shoulders strong enough to see this through. It was assisted by joint actions with Done Brothers and the now world famous Mrs Linnewebber whose name is a beacon in legal interpretations of the law following her battles on VAT claims in Europe.

Back here though, the VAT monies are coming home. How long that will take is another matter of dispute – HMRC have still not settled up anywhere near the number of claims made for pre-2005. This latest defeat, most acknowledge, will place a severe drain on Customs resources, a point that will likely be taken up by trade associations in due course.

Tributes will also be paid in the coming weeks to the role of expert witnesses who helped fashion the judgement. Among these were Peter Hannibal of the Gambling Business Group, Andrew Sackey of Rank, Angus Nisbet of Playtech, former Grosvenor employee Simon Beacham and Richard Mountney from Global Draw.

Still early in the news cycle, Bacta were among those quick to welcome the decision. CEO John White said: “The industry will let out the collective breath it has been holding for nearly six months now we have a formal decision quite rightly determining that VAT was not payable on gaming machines from 2005 to 2013.

“The case in essence followed the previous Rank/Done Bros litigation which led to the Upper Tier tribunal concluding no VAT was payable on machines for the pre-2005 period. Why it has taken so long for this judgment to be published is an open question, one we put to the Minister in a letter last month. We will have to see whether HMRC Appeals. Whether it does or doesn’t, what HMRC need to do is ensure that any repayments are made quickly. Our experience of pre 2005 claims is not a happy one. At a time when businesses are struggling so desperately as a result of the pandemic, any delay is frankly unconscionable.”