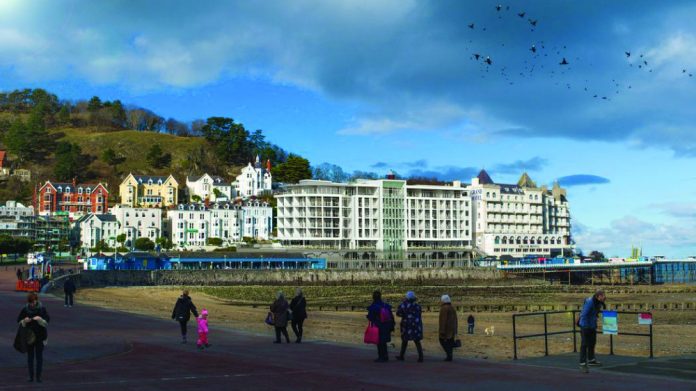 The £20m development proposed for the foot of Llandudno Pier has been postponed, as the Welsh government responds to requests to call-in plans for the ten-storey building.

Controversial plans to build 52 apartments at the foot of Llandudno Pier could be investigated by the Welsh government, after Conwy Council received a holding direction from ministers following call-in requests.

The direction will see construction work on the ten-storey development paused as the government considers its impact on the town, and comes as local businesses – including the pier itself – continue to oppose the plans.

“Why should the entire identity of Llandudno’s heart be lost for the sake of a one-off residential block?” said pier owner Adam Williams, adding the project poses a “very serious risk” to the heritage attraction.

The proposals, which would see three-storeys of parking, 20,000 sq ft of restaurant space and a further six levels of apartments built on the site of the former Pavilion, were submitted to planners in 2018 by Quay Developments Ltd, and approved the same year.

The scheme intends to make use of land between the Grand Hotel and Leisure Island Amusements, which has remained empty since the Pavilion was destroyed by fire in 1994.

However, local opposition to the £20m development has been significant since Conwy Council green-lit the plans, with then-mayor David Hawkins telling the North Wales Pioneer in 2019 that “the development that is proposed doesn’t fit in with the town and what is around the site.”

“The development will cause major disruptions to the tourism industry, especially the Pier.”

Llandudno Pier was one of a number of local businesses to submit a call-in request to the Welsh government, with Williams telling the Daily Post “this is the biggest decision in the history of the pier.”

“If this gets through it will shorten the life of the pier, it is that serious. More people need to realise this and start fighting for the pier.”