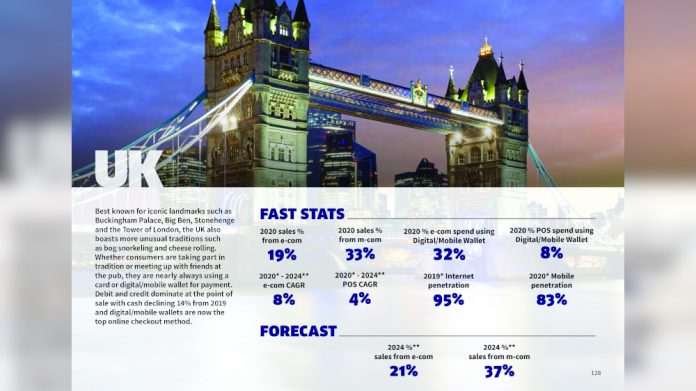 The decline in consumers’ use of cash is considered to be among the most dramatic shift in payment methods in history with forecasts suggesting it will fall to 7 percent of spending in shops by 2024.

Retail gambling experienced several years worth of decline between April 2020 and September 2020 as statistics from the Gambling Commission show a sector devastated by Covid-19.

Britain is on the verge of becoming a cashless society, according to an influential new report published by payments processor Worldpay. The company’s Global Payments Report 2021 has forecast that cash will fall to 7 percent of spending in shops by 2024. The decline has been rapid with the response to Covid-19 acting as an accelerator. The report found that cash usage for UK in-store purchases declined from 27 percent in 2019 to just 13 percent last year. In 2020, 49 percent of spending in shops was made using debit cards and 21 percent by credit card.

According to the Global Payments Report, cash use declined at the POS (point-of-sale) in Europe by more than a third (33.6 percent). The decline in consumers’ use of cash represents among the most dramatic payment method shifts in modern times. Cash volumes dropped by more than half in France (59.6 percent) and the U.K. (51.1 percent). Germany saw the least drastic declines, falling by 12.5 percent in 2020 to account for 43.5 percent of POS transaction volume. The Report states: “Though the greatly accelerated pace of cash’s decline in 2020 was directly attributable to the pandemic, our forecasts see additional retreats independent of COVID-19’s path. Europe will see the use of cash declining 9.9 percent annually through 2024, when it will represent just 15.4 percent of POS transaction volume. By 2024, we project cash will capture 15.4 percent of POS spend in Europe. Denmark, Sweden and Norway are expected to be nearly cashless within five years, while above average cash use will persist in Germany, Italy, Spain and Poland. Cards accounted for most European POS payments in 2020, increasingly of the contactless variety. Cash’s loss is translating to wins for cards at the POS: 41 percent share for debit, 11.5 percent for credit cards, 6 percent for charge cards and 2.6 percent for prepaid cards. Our forecast projects debit cards expanding their share lead through 2024, reaching 43.9 percent of POS spend.”

Pete Wickes, general manager, Emea, Worldpay, said: “This research shows the speed and scale of the transformation in consumer behaviour in just 12 months. While this opens up new opportunities for businesses to optimize and drive efficiencies, we need to be mindful that important parts of the economy continue to rely on cash, such as charity donations and restaurant tip jars, while there are many in society who remain underbanked. Fintechs and regulators need to collaborate to build new frameworks that allow for this shift and use of technology to boost financial inclusion especially for those underserved communities.”

Reflecting on the report, Gareth Shaw, Which? head of money stated: “If the shift away from cash is not handled carefully, there is a very serious risk that it will exclude a significant number of people who are not ready or able to take advantage of these payment methods. The cash network has already been severely damaged in recent years, particularly since the start of the coronavirus outbreak, because there has been no effective oversight to ensure the millions of people who still depend on it can still withdraw it. The government must move quickly with its plans to safeguard access to cash through legislation, to ensure that the system remains viable for as long as it is needed.”