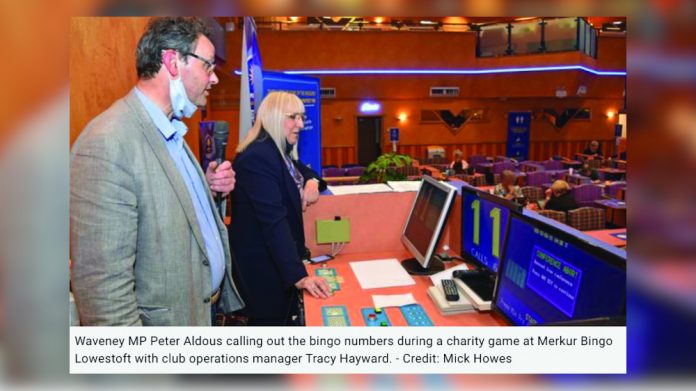 A local MP gets to grips with the bingo lingo and salutes the community credentials and vibrant atmosphere of the rebranded MERKUR Bingo Club in Lowestoft.

Peter Aldous, the Member of Parliament for Waveney, has applauded the important community role that bingo plays in combatting loneliness and addressing social exclusion particularly in the elderly. The MP, who has represented the North Suffolk constituency since the 2010 General Election, made his comments when he took to the mic to call out the numbers during a visit to celebrate the rebranding of the MERKUR Bingo Club in Lowestoft. After completing his starring role guided by club operations manager Tracy Howard, he said: “It’s great that many people are getting back and returning to bingo, which in this location is part and parcel of Lowestoft. Now the facility is open once more, for older people it’s absolutely crucial to get out and socialise with friends in a vibrant atmosphere, which is so important to combat loneliness. Also, this hall is leading the way across the country in opening up to younger people and that shows we have got a tremendous facility here where people can have a great night out. This is a major asset for the town and one we should cherish.”

Tracy Hayward, who has spent more than two decades working at the club told local newspaper The Lowestoft Journal how customers appreciate the sense of community that underpins the bingo experience. She said: “People come in and make new friends, we are a bingo family.” Explaining that the club is open to those over 18-years she added: “We get a lot of youngsters coming in during the evening, and going forward in the future we will look to have a DJ for our younger members.” Tony Boulton, Director of Public and Political Relations at MERKUR UK thanked Mr Aldous for taking time out of his busy schedule in order to visit the club. He said: “It’s fantastic when MPs are able to visit the MERKUR venues in their constituencies. Most, if not all of our staff and customers live locally and it’s a great opportunity for us to demonstrate what we mean by the MERKUR experience including the undertakings we are making in terms of safer gambling. Many of our loyal customers have been visiting for decades and Mr Aldous was able to take time out and learn from them about the social side of bingo and how important they are finding it to be able to catch-up with friends after lockdown.”

He continued: “I believe that our retailing standards and the quality of the customer experience match anything that’s found anywhere on the high street which is why it’s so important to be able to host MPs and dispel any of the misconceptions they may have of the industry. Mr Aldous clearly enjoyed his time with us as he’s agreed to return to celebrate National Bingo Day on 27th June!”