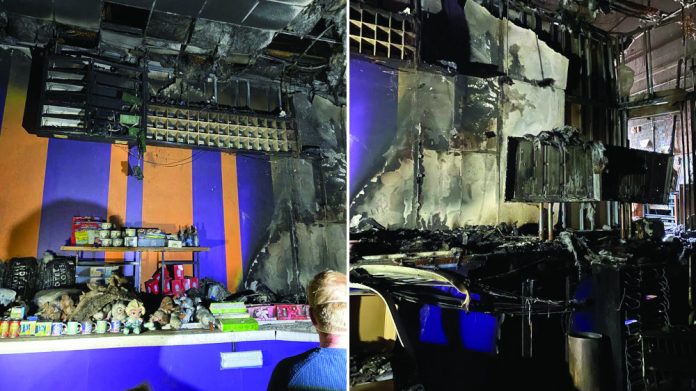 A blaze has forced the closure of the Majestic owned Regent Bingo Hall in Spalding, but managing director Mark Jepp is already planning the reopening.

Mark Jepp, Managing Director of Majestic Bingo, has vowed to rebuild the Regent Bingo Hall in Spalding ‘bigger and even better than before’ after the 650-capacity club sustained extensive fire and smoke damage when a blaze broke out in the early hours of Friday 14 May, just three days before it was due to reopen. The fire, which was the result of an electrical fault, caused hundreds of thousands of pounds worth of a damage to the building which also served as the company’s head office. The Majestic Finance Department has been rehoused in temporary accommodation based in the Regent’s car park.

“When you get a call at 3am it’s never going to be good news!” stated Jepp. “When the shock subsides a bit and you thank God that no one was hurt and that you are fully insured the focus shifts to how you can get back to business as quickly as possible and about what the future will or could look like.”

The team of 13 have all been retained with some redeployed to nearby Skegness. Mark confirmed that the schedule of works is such that the club will not reopen until late 2021/early 2022. Speaking with local newspaper The Lincolnite he said: “What hasn’t been damaged by the fire, which was contained to the back end of the club, was still damaged by smoke through the whole building. “The only silver lining is that we can come back from this and we will build the club back to its former glory if not better. I want to rise the club back from the ashes, literally.” Mark Jepp told Coinslot: “As you know we have a ‘glass half full’ outlook at Majestic and we have been working on a range of exciting new ideas during lockdown. Whilst I would be much happier if we were open, entertaining our customers and earning some income having been shut for such a long time due to the Covid regulations, this provides an opportunity for us to introduce some of our new thinking and concepts.”

Reflecting on the last fortnight and the help received from both the industry and the people of Spalding he said: “My thanks go to the Lincolnshire emergency services, to my brilliant staff who have literally rolled up their sleeves and faced up to the task in hand. I’ve received some really nice messages from other bingo operators, in particular from the team at Castle Bingo who have gone through the same circumstances and provided invaluable insight. Our customers have been superb and I have to say the Spalding business community including local media have been really supportive. It goes to show how important Bingo is to the community.”