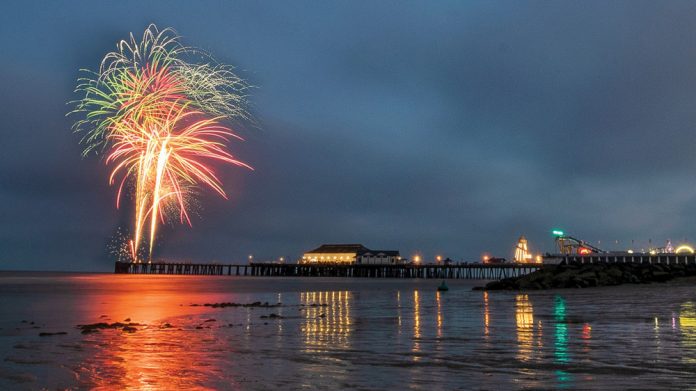 As Clacton Pier marked bank holiday with its first firework display of the season, seaside resorts up and down the country welcomed back visitors making the most of the sun.

Clacton Pier celebrated being “truly back in business” this bank holiday weekend, as the seaside landmark hosted its first free fireworks extravaganza of 2021.

Alongside an events programme including live music and outdoor hospitality, the display saw local families flock to the pier in the evening, after enjoying the sunny weather.

“Clacton was buzzing and at last, we had a proper bank holiday with fine weather, everything was back open, and we were able to put on one of our popular free fireworks extravaganzas,” said pier director Billy Ball. “Finally, we are truly back in business and can only hope that it stays that way and there are no further setbacks due to Covid.”

“After a difficult year or so the optimism is returning, and we can see the light at the end of the tunnel. There were lots of smiling faces and families were able to make the most of the break together.”

The fireworks display saw visitors spaced along the pier, and the top and lower promenades, and followed on from the pier’s live entertainment offering, which offered a glimpse of what may be to come.

“It was fantastic to see the return of live music over the weekend to entertain those sitting in the sun outside the Boardwalk Bar and Grill.”

“It felt like we were almost back to normal, and it was as near as we can get to it under the current guidelines. Hopefully, all restrictions can be lifted on 21 June but that will all depend on the data for that to happen.”

• In Bournemouth, the public made their way to the south coast pretty early. Four of the town’s main beach car parks were full by 11am on Sunday, with no spaces left at Sandbanks, Branksome, Alum Chine and Durley Chine.

• In Southend, veteran arcadian Martin Richardson noted “we had a good consistency of customers” which was in keeping with a ‘packed’ resort. So much so, the pier train was forced to suspend service for 30 minutes in order to shuttle those from the top of the pier, after being “inundated” with visitors.

• The garden of England was pulling in the punters, although there was a buzz-kill warning from local authorities. Thanet Council urged those visiting Broadstairs, Margate and Ramsgate to turn round, stating “we’re not back to normal just yet.”

• Over in Wales, Mumbles Pier marked a popular weekend by hosting a Disney Dance Party on bank holiday Monday, stating “booking is essential” due to high demand.

• Brighton had much to offer he bank holiday tourists with the Palace Pier celebrating a “wonderful day” on 31 May, as well as putting its full weight behind the return of the Brighton Fringe which kicked off its programme of 600 events across the city over the coming month.

• South Parade Pier in Southsea was another hot-spot with staff stating: “Well haven’t we just had an amazing Bank Holiday weekend guys. We hope you all had as much fun as we did.”

• Elsewhere on the pier, Kidz Island operator David Wallis stated “the weather makes a massive difference. We lost the last three weekends because of it.

“We have invested heavily with the rides so we need the good weather. We really need it to be a good summer.

“If we make it good now, people will want to come back. When people come they should think, “it’s quite nice where we live, it’s lovely here.”

When Instance Automatics MD Ian Eason posted on Facebook “how has everyone done yesterday?” following the sunny Saturday on 29 Mayh, the response was overwhelming.

Chris Harrison noted Blackpool was “packed,” while Alan Robinson echoed the statement, adding it was “packed in Bridlington yesterday.”

Paul Robinson commented “on Friday night I had a customer buy 4 x £40 buckets of 2ps, they’re definitely spending this year,” and Gary Bond added “Paignton was nice and busy.”

“Canvey hasn’t been this busy since the days of Double Dragon and Pacland,” added Edward Parkin. “This is the first time I’ve had a chance to check my phone today.”

Charles Manning said “it’s like a Sunday everyday in Felixstowe! Probably the busiest for ten years,” but added “let’s not jinx it though.”

In Skegness, Sharon Simpson reported: “Skegness was really busy, my kiosk was non-stop.” 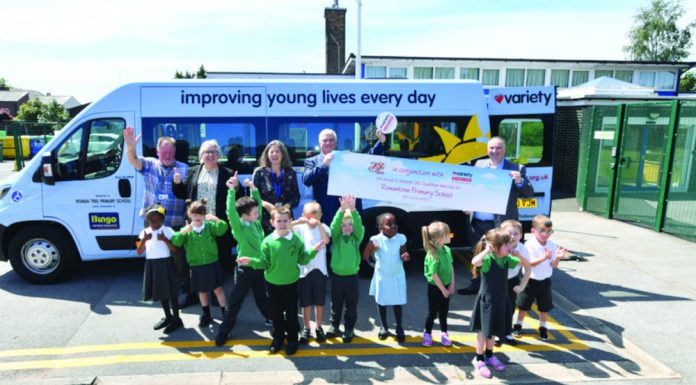