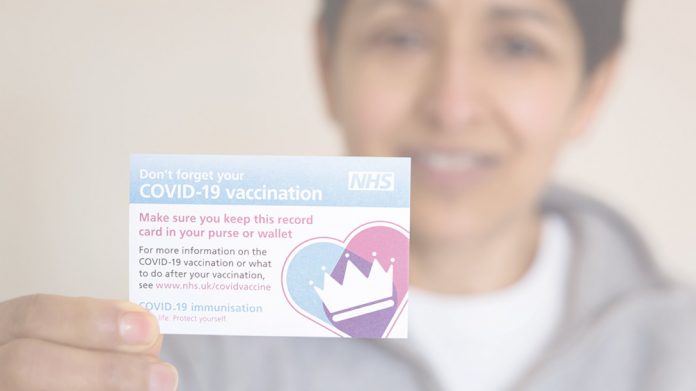 Once considered a pet project of the government, sources are now briefing against a law change to mandate the use of vaccine passports within the UK.

The Government appears to have bowed to pressure from the business world and is planning to ditch plans to make Covid passports or status certificates a legal requirement within the UK.

The prospect of introducing Covid passports, defined as a certificate showing proof of a Covid jab, a recent negative test or anti-bodies after catching the virus, were first discussed in February when a review was launched reporting to Michael Gove, but sources, described as well-placed figures on the Covid taskforce, are briefing against the chances of them being made mandatory. The decision will draw on the experience of Israel which is preparing to drop its Green Pass on the basis that so many of the population have been vaccinated. A survey of 1,000 UK businesses carried out by the British Chambers of Commerce showed 78 percent of respondents had no plans in place to require evidence of vaccination from customers, suppliers or employees.

Smaller firms were more likely than larger firms to have no plans to do so – with 80 percent of businesses with less than 50 staff giving this response. Only 4 percent of smaller firms said they already required proof vaccination and 6 percent said they were likely to in future.

For businesses with more than 50 staff, the proportion who had already implemented a requirement for proof of vaccination rose to 9 percent, with 8 percent saying they were likely to introduce it in the future and 13 percent saying they needed more information. However, 69 percent still said they had no plans at all to require proof of vaccination from customers, suppliers or employees.

Responding to the findings, Co-Executive Director of the British Chambers of Commerce, Hannah Essex, said: “This research shows that government must quickly clarify what measures will be required for businesses to maintain safety standards after we reach the final stage of the roadmap on June 21st. In particular, they must resolve the ongoing debate around the use of vaccine certification, providing clear and decisive guidance to business.

“There has been a great deal of mixed signals on the issue of businesses being required to demand proof of vaccination from customers, suppliers or employees. Our figures show that as it stands the vast majority of firms have no plans in place for such a scenario. So, if government is indeed planning to make this a requirement, then it must act rapidly to inform businesses so that they can adjust and prepare.”

She added: “Right now, many businesses are working on the assumption that they will be continuing with a variety of Covid-secure measures over the next 12 months including social distancing, mask wearing and various other interventions. Many of these measures come at a cost to business and can restrict firms’ ability to trade at full capacity. Government must clearly set out when, and in what way, it will be safe to change these practises so that businesses can fully play their part in the economic recovery from the pandemic.”