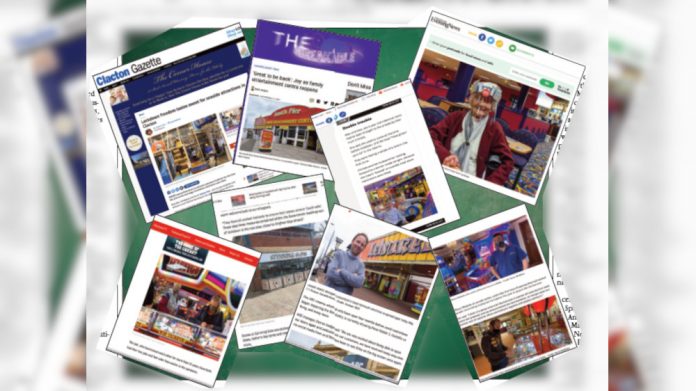 As arcades, FECs and amusement centres reopened on 17 May, local media across the UK were some of the first through the door, with reporters keen to celebrate the return of the business of fun.

Local news outlets were among the first to celebrate the reopening of arcades across the country this week, with many reporters making attractions, FECs and amusement parks their first port of call on 17 May.

From Clacton to Blackpool and Plymouth to Teesside, the local press proved keen to mark the industry’s return to business, with features on families and friendship groups checking back into their favourite venues.

“Friends Gail Prasher, Maureen Penfold and Eve Wells from Banbury in Oxfordshire came to Blackpool for the weekend and had been looking forward to the resort’s arcades being open again,” reported the Blackpool Gazette. “The trio were at Central Pier on the penny machines.”

“Gail said: “I’ve been coming to Blackpool every year since I was a child and I just really enjoy it… Maureen added: “I think doing things like being at the arcade helps a bit with your mental health as it is something different for your brain to try out.””

In the North East, identical twins Max and Alex were photographed by the Teesside Gazette ‘having a whale of a time’ on the rides at Kids Zone, with mum Christie stating the family “used to come all the time before lockdown,” while just down the road in Seaton Carew, Talk of the Town amusements’ Tracy Doherty told the paper she was “very glad to be back.”

Further south, the Clacton and Frinton Gazette was at Clacton Pier as it welcomed back guests, with director Billy Ball telling the reporters “it has been a long time coming but we are finally there now.”

“Today staff and customers returned and there was a real buzz about the place – almost back to normal!”

In Lowestoft, Steve Ashford, general manager of the South Pier Family Entertainment Centre told the Lowestoft Journal “it’s great to be back again” after being closed for five months, while further round the Norfolk coast, Pop Inn Leisure arcade staff member Shaun Walpole predicted “I think it is going to be a bit like last year” while speaking to the Fakenham Times.

“It started off slow the first week and it did gradually pick up and just before the last lockdown, we did get back to a normal sort of capacity where you had your regulars and people coming in.”

The Great Yarmouth Mercury was also on the seafront on Monday morning, covering the reopening of Leisureland amusement arcade, stating “immediately people were drawn back to the penny pushers as well as the chance of winning a tonne of tickets.”

“We took the business over last year.” Mr Abbott, 38, continued, “but we want to welcome all the customers, old and new. “We’re looking forward to what is expected to be a good summer. “I’m feeling more and more positive about it, definitely.”

While the Leigh Journal celebrated the opening of Spinning Slots Cafe and Amusement Arcade, the Manchester Evening News headed to Buzz Bingo, describing how “87-year-old Audrey’s face lit up” when describing her return.

“Audrey, who even decorated her visor especially for the occasion, said: I never win here, but I’m never going to stop coming.”