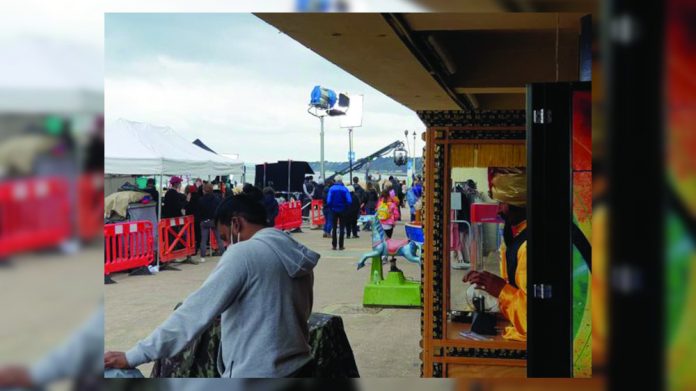 As restrictions ease across the UK, it’s not just tourists and holidaymakers flocking to the coast, as camera crews from Disney, Amazon and Netflix all head to the great British seaside.

The picturesque draw of the British seaside is once more proving attractive for filmmakers and TV crews, as Netflix, Amazon and Disney set up their cameras in Brighton, Cleveleys, Sandbanks and the Purbeck coast.

“Crews have been set up on the promenade by Bournemouth Pier, just outside the Happyland Amusements building,” reported the Bournemouth Echo. “BCP Council confirmed it was for a new Three UK mobile commercial.”

“Beach-goers have had to “wait their turn” to cross through the filming, which started on 12 May. It comes a little more than a month after film crews were in Sandbanks, reportedly for a new Sandman series on Netflix.”

Disney+ crews are also reported to have set up camp nearby at Purbeck’s Winspit Quarry, with the desolate stony landscape representing the surface of an alien planet for upcoming Star Wars series Andor.

“Filming started in the UK last week with lead actor Diego Luna and stormtroopers spotted on a beach in Cleveleys, Lancashire,” reported the BBC.

Commenting on the latest round of filming, Worth Matravers parish clerk Roger Khanna stating: “I’ve been impressed by how well it’s being controlled and managed. There’s been no impact on locals. They’ve been very considerate of the area.”

Stars were also in evidence at Brighton Palace Pier this week, with Harry Styles and The Crown actress Emma Corrin filming at the iconic attraction for new 1950s set Amazon Studios series My Policeman.

“My Policeman is set largely in Brighton and Hove, but locations in Worthing and Newhaven have also been used for filming,” reported The Argus on 14 May. “Film crews were spotted at the pier yesterday, taking the landmark back in time more than 70 years.”