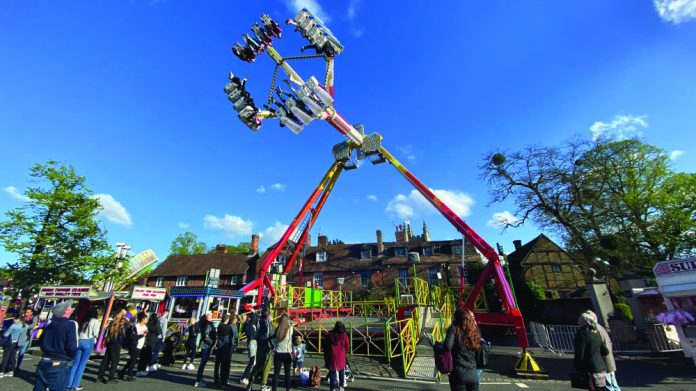 While its the 150th fair to take place since restrictions eased up on 12 April, the Showmen’s Guild’s 752nd annual event in Beaconsfield represented the first street fair since the end of lockdown and acted as a pilot event for more to follow, with 112 fairs planned for this summer.

The Showmen’s Guild of Great Britain successfully piloted the first socially distanced street fair on 10 May following the easing of national restrictions a month prior. The Covid-secure event took place in Beaconsfield in the form of the town’s 752nd annual fair, with the guild stating that it has paved the way for other towns with charter and street fairs to follow suit.

“The Fair had plenty of stewards at the entrances to assist with the NHS Test and Trace procedure, whereby visitors interacted their smartphone with the fair’s unique QR code; with a paper on standby. As predicted, visitors stayed within their family household bubbles as they toured the attractions with further stewards to assist them and copious hand-sanitising stations among the other facilities, throughout the fair,” said the Guild in a press release. “Whilst having an attendance ceiling of 4,000, with fairgoers counted in and out; the fair in fact worked to a lower traffic of pedestrians, with planned road closures in place as per other years. Even free entry, the fair was controlled, to ensure space for family household groups to roam, maintaining social distance, in the fresh air. Each attraction underwent enhanced regimes, continuing throughout the day, with individual entrances and exits on rides, to ease customer- flow.” The Guild explained that the fair drew visitors locally and from surrounding areas, with families eager to make the most of the occasion, staying longer than usual and spending freely.

“This mirrors the positive attendance and trading that the Showmen and women have experienced across the country, wherever fairs have managed to operate since 12 April, including the Showmen’s Guild London Section team’s earlier three-week long Blackheath Fair in Greenwich, south London,” continued the Guild. “Beaconsfield Charter Fair, whilst being the first street fair to reopen, represents the 150th fair overall to return to the streets since 12 April; as part of Stage 2 of the government’s Roadmap to reopening the country; with another 112 in the pipeline, from now and into the summer.” However, the Guild added that there are several areas where fairs have not been allowed to go ahead by local councils, especially in larger settings, noting that it hopes the success of Beaconsfield can be the perfect example of good practice to follow.