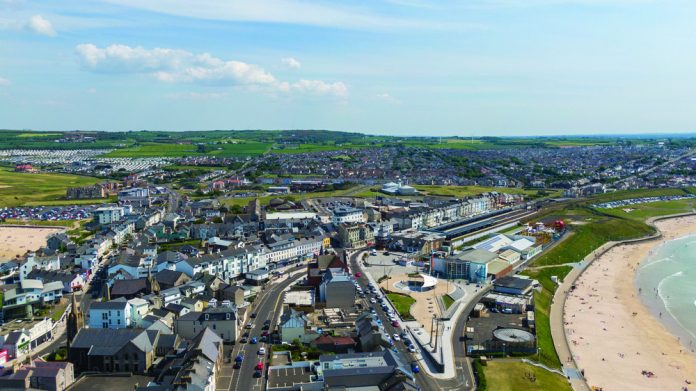 The site of iconic attraction Barry’s Amusements is up for sale for £2.75m, with its new agents advertising the plot as “the last true seafront site available in Portrush Town.”

Much-loved Portrush seafront park Barry’s Amusements could be in line for redevelopment, after the 2.23 acre plot was placed on the market, aiming to attract “property developers from far and wide.”

The iconic 93-year old attraction was first listed for sale as a going concern in November 2019, however a change of agents and a new £2.75m price tag could see the County Antrim property become a 120-bed hotel.

“Whilst our hope is that we will be able to sell the business as a going concern, we recognise that it may not be possible to find a suitable purchaser,” said a statement from the Trufelli family. “As a result, we have appointed Savills and Philip Tweedie & Company to market the site as both a going concern and a development opportunity.”

“Barry’s continues to remain closed in line with Covid restrictions and will not reopen until the sale process has concluded. There will be no further comment from the Trufelli family.”

Widely recognised as Northern Ireland’s longest running amusement park, Barry’s was first opened in 1926 by Evelyn and Francesco Trufelli, and is still run by their descendants Kristina and Lisa Trufelli.

The park had attracted a number of potential purchasers prior to 2020, including family-owned business Curry’s Amusements, however the impact of the pandemic saw many firms reassess their business expansion plans.

The relisting of the site follows a feasibility study by Savills, which reimagines the fun park as the site of a 120-bed hotel, 23 homes, or a combination of the two, “in addition to leisure and recreational facilities.”

“We expect demand to be strong due to the potential that this site offers,” said Neal Morrison, director of joint agent Savills Ireland.

Fellow agent Philip Tweedie added “this is in essence the last true seafront site available in Portrush Town and should attract a high level of interest from a mix of entrepreneurs and property developers from far and wide.”

Northern Ireland’s former first minister has backed a petition to save Barry’s Island from redevelopment, which has already gathered over 4,500 signatures.

Arlene Foster retweeted the link to the change.org site to her 96,000 followers on 7 May, prompting an immediate boost of 800 signatories.

“Children have missed out on so much fun due to the Pandemic and deserve to experience the happy times in Barry’s Portrush that we all have,” states the petition, started by Portrush resident Judith Park.

“Please don’t let it be changed into a hotel or housing accommodation. Portrush just wouldn’t be the same without Barry’s.”