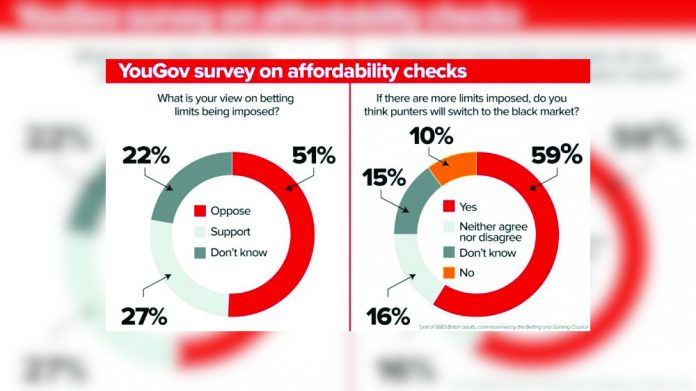 Informed newspaper reports are suggesting that affordability checks are to be included as part of the Gambling Review and subject to deeper, evidence-based scrutiny, a move which has been welcomed by the industry but will disappoint the regulator.

The Gambling Commission proposal to introduce mandatory affordability checks on consumers, has suffered a major setback as ministers have decided to incorporate the controversial plans into the much broader review of the country’s gambling laws, according to a report in Tuesday’s edition of the Daily Telegraph.

Quoting unnamed betting industry sources, the Telegraph argues the decision to put proposals in front of politicians in Westminster will result in the terms of affordability checks being either diluted or shelved altogether.

While the checks were aimed at online operators, key figures in the land-based industry feared the mindset driving the proposal mandating punters to show their pay slips as proof of income, would also find its way into retail sectors including adult gaming centres, bingo clubs, licensed betting offices and even pubs. The controversial proposal, which the Commission planned to impose on customers who lost £100 pcm, was widely criticised as being an assault on civil liberties and a measure that would serve to drive players towards unregulated or unlicensed sites. British horse racing said the checks would cost the sport £60m a year.

The decision to remove authority from the Gambling Commission represents a major power grab by the Department for Digital, Culture, Media and Sport and inflicts further reputational damage to an organisation which former Tory party leader and vice chair of the Gambling Related Harm All Party Political Group, Iain Duncan Smith, famously described as being: ”toothless, wet and not fit for purpose.”

In December the Government’s consultation on gambling included a call for evidence on the Gambling Commission’s resources raising the spectre of a gambling ombudsman. Further damage was caused by the resignation of chief executive Neil McArthur in March which came in the wake of the collapse of Football Index.

The Gambling Business Group, one of the sternest critics of affordability checks, believes the proposal should never have been tabled by the Commission in the first place. Chief executive Peter Hannibal said: “If this report is accurate, and there’s no reason to doubt it, I am delighted that the arguments put forward by the Gambling Business Group and its members have been listened to and our warnings heeded.

“Our concerns are that affordability checks will push customers onto unregulated sites and undo the great progress made by the industry in terms of keeping the incidence of problem gambling at consistently low levels.

“At the time I argued in Coinslot that it would be more logical to include any proposals for controls on consumption – that could have a profound impact on the public – as part of the Government Review. It would also be in the public’s interest for proposals for such intrusions into personal affairs to be subject to the same Aim and Objectives as those DCMS set out for the Review of the Act.

“The affordability proposal raises a huge range of quite fundamental ethical, legal and practical issues – not least a precedent for state intervention in consumer spending alongside a quite startling presumption that gambling entertainment, enjoyed responsibly by 99 percent of consumers, represents a public health issue way beyond that of tobacco, excessive alcohol consumption or obesity. As such it merits much deeper, evidence-based scrutiny.”