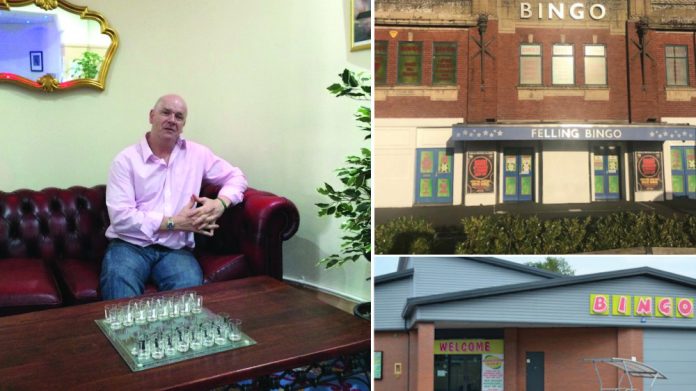 Have you had a business interruption insurance claim turned down because of the coronavirus small print? Well, you’re not alone. Hollywood Clubs owner Andrew Reilly talks to Coinslot about the bingo sector’s experience and how the damaging commercial fall-out may well turn an ineffective insurance policy into regulatory policy to compensate businesses for failed cover.

There’s trouble a-brewing for the insurance sector, and it’s probably not long in coming. The business interruption debacle is on the road to a scandal, and according to Hollywood Clubs owner, Andrew Reilly, it’s just a matter of time.

“I’m surprised legal action hasn’t happened sooner,” Reilly told Coinslot in his customary calm and stoical tone. But the words were full of determination. “I would encourage all leisure sectors to ensure every area of their insurance document is scrutinised and exhaust all avenues,” he advised, “because I believe if you’re covered for Business Interruption as a result of central government closing licenced premises, you ought to receive a pay-out.”

That, however, has not been the case; and Reilly has been voicing his concerns over business interruption insurance for a year now.

It was back in January when he raised the alarm bells around the industry on the matter. Whilst a supreme court hearing was instructing claims to be paid out by some insurance firms, Reilly was having his own battle with insurers who had a different perspective on the business interruption clause.

That battle is still ongoing with parley some way off. But pockets of resistance are popping up across the hospitality and leisure sector with pub operator Inception Group the latest to take legal action dragging AXA to court two weeks ago.

“Businesses that were insured for business interruption would have expected to receive a payout,” Reilly explained: “To be told that their specific policy wording means they are not entitled to be paid will have resulted in shock and devastation.”

And this could have serious repercussions. “With this kind of experience, some business owners will have serious doubts with the insurance process, some may insure to the minimum going forward, some may not insure at all.

“There are broken people out there in the leisure sector because they trusted the very people that were supposed to keep us safe, indeed protect us with best advice, and we paid in good faith. But we have been let down in the worst possible way.”

Over 110 days in lockdown so far this year, and almost double that in 2020, the UK’s arcade and bingo sectors are among the worst hit by Covid commercially. With two bingo clubs at the heart of their communities in Hednesford and Felling, Hollywood Clubs is well versed in the fall-out from lockdown.

“Instead, many businesses have closed and that can’t be right. For me, I have pressed the reset button and I consider myself lucky because I have another chance. “Sadly, I know that’s not the same for everyone.”

Action is clearly needed, but it may not be as simple as that.

The insurance sector is the fat cat of the UK economy; it stands as the largest insurance industry in Europe, the fourth largest in the world, its tax contributions to UK plc is nearly £80 billion a year – the largest contribution of any sector in the country – and it serves as the world leader in exporting insurance around the globe.

It really does not want to pay for the damage caused across the business landscape by Covid.

It would be fair to say: business interruption is as dangerous to the insurance sector as it is to the hundreds of thousands of businesses in the UK who took it out.

Rest assured, the insurance sector will put up a fight – and it has the funds to do so.

Morally, however, it struggles to find a leg to stand on – especially against the ‘legs eleven’ its ill-served bingo customers proudly proclaim every night in clubs up and down the country.

And that, in effect, is Reilly’s case. “I firmly believe a thorough strip down of the insurance process would be correct. The insurance industry must be investigated by central government and demonstrate absolute transparency in order to re-establish consumer confidence.

“Why would you trust the system as it is today? The broker and underwriter sitting comfortably, with the paying customer left on the outside. That is a barrier and it must change.”

And for Reilly, the solution is fairly obvious. “Right now, the government should assist financially and claw back from the insurance fat-cats.”

Until then though, the system is likely to follow its only course available; legal action.

Reilly noted: “The problem with the commercial business insurance industry is we don’t trust them anymore because they let us down in our greatest hour of need. The best solution is to review the system because it cannot be right that a paying customer isn’t able to communicate with the underwriter or get a sense of justice from the insurance company.”

But something will be needed to prompt that review, a conclusion Reilly has fully recognised, and one he senses could be far bigger than the 20 year battle between Rank Group and others versus HMRC over VAT payments on S16 and 31 machines.

He concluded: “I firmly believe there will be a real test case for all and not the few. A People vs Insurance Companies, resulting in a government review and change.”

In the context of a pandemic and the long road to recovery businesses like Hollywood Clubs now face, the prospect of a two decade war on the business interruption insurance front is unpalatable – barely eased by an ironic possibility of claiming off their insurance policies to fund legal action against that very same insurance company.

No, the Reilly plan for a government review is by far and away the best and most pragmatic option. If only a politician or government figure would recognise the desperate impact the insurance cover illusion is creating to so many small businesses – and acts on it.