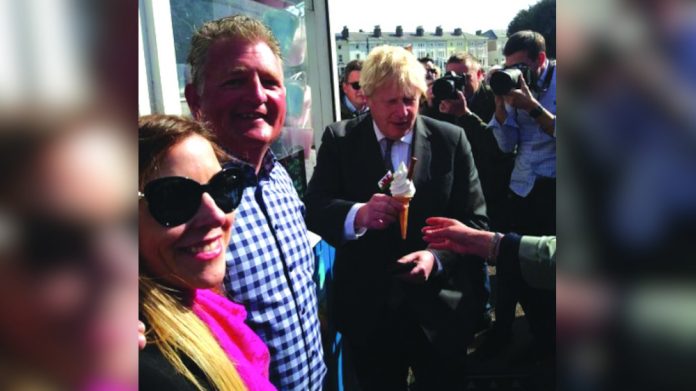 Boris Johnson enjoyed an ice cream on a visit to Llandudno Pier this week, part of a campaign to support the Conservative party’s candidate in the upcoming Senedd election.

The Prime Minister visited the North Wales landmark on 26 April for an up-close and personal encounter with pier owner Adam Williams, shortly after a visit to a factory in Wrexham.

Williams posted a simple message on the visit on social media: “Not everyday Boris pops in for an ice cream.” And the response was overwhelmingly positive, evidence that the PM continues to be a sell-out figure on the doorstep, if not Parliament itself.

“Next stop Llandudno where he had an ice cream, posed for selfies and chatted with locals in a way only he could. Up close, full of personality but barely any social distancing,” reported the Daily Post on the afternoon’s procession.

“Love Mr Johnson or loathe him, he has a magnetising effect on a crowd, one which swelled to between 250-300 at its peak, as he ambled along the prom.”

Unsurprisingly, for a leader currently embroiled in claims of corruption, the visit – in support of Aberconwy Conservative candidate Janet Finch-Saunders – proved divisive.

“A great accolade for the Pier and recognition of the substantial investment that buying the pier represents,” stated local Berin Jones on social media, hailing “the importance of the Prime Minister’s office visiting the town.”

Several dozens of congratulatory messages were posted to Llandudno Pier within hours, although there were a number quick to criticise the PM shaking hands and posing for photos with locals.

Evidence that you can’t win them all, but you have to hand it to Boris Johnson: to visit a venue which has been decimated by a year of lockdowns and still emerge a heroic figure takes some doing.

But, the visit will also have provided a first hand insight of how hard people in the amusements industry have worked to maintain their businesses in torrid circumstances and how important they are to the community – and even politicians.

If anyone can get a message through, it’s probably Adam Williams.