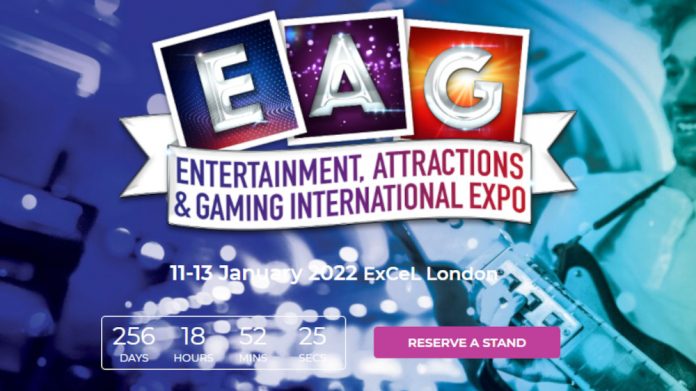 Bacta has stepped up to kick-start the industry’s trading recovery from what will effectively be 18 months stalled on the side lines. The trade association has announced a major investment in its January B2B exhibition, support which should ensure the biggest assembly for the UK amusements industry in decades.

It’s a bold statement,” said UDC managing director Mark Horwood when news was confirmed that Bacta was to support the industry with an investment package for next January’s EAG Expo. “It shows the association is backing the industry and it’s a welcome move,” he added.

It’s also a sound one, or as Horwood described, “a no brainer”; investment in the number one amusements exhibition in the country will ensure a significant response from both exhibitors and visitors.

The finer detail has yet to be released, but incentivised packages will almost certainly draw the big and the best of the UK industry to London’s ExCeL Centre over January 11-13 next year.

And boy does the supply and machines trade need a good show. In the words of one key figure when asked privately about the decision: “You’re absolutely right that DIV 4 has had little or no support from Government following Covid, and I know from speaking to many members of that Division this is a much welcome step.”

The supply chain has been decimated by a combination of Covid and inept Covid-support mechanisms in which the government has simply ignored the pleas for direct support – and now.

Hence Bacta’s step forward. In its press release following yesterday’s National Council meeting, the association stated: “Bacta’s governing body unanimously agreed to make a significant investment into the upcoming EAG Expo 2022 to counteract some of the lasting economic effects of the pandemic.

“EAG is vital to the amusement and gaming industry and our members,” stated Bacta President, Greg Wood. “However, like many other businesses, it has been impacted by the pandemic and the loss of revenue that was caused by cancelling the 2021 show. We want to ensure that EAG returns in 2022 stronger than ever. By investing into the event, we can offer incentives to Bacta members on their stand space, as well as ensuring that the marketing and presentation of the show remains world-leading, now and into the future. We want to ensure that we invest in our show so that it can remain a jewel in the crown of the industry calendar. All Bacta divisions, representing seaside amusements, high street gaming centres, suppliers to pub and clubs, as well as manufacturers and distributors, agreed unanimously that we need to support EAG, which is a significant Bacta asset.”

Martin Burlin, Chairman of EAG concludes, “Organising a show on the scale of EAG at a venue like ExCel London requires significant resources both on our part and for our exhibitors. Without additional investment this year, we know it would have been a struggle to maintain the high standards that our visitors have come to expect from us.”

“We all support Bacta and Bacta must support the industry’s flagship EAG. Without this investment in EAG, we will see the pattern of shows disappearing around other countries when they didn’t support their exhibitions like IMA in Germany, the Pragua show, the Athens show, the Paris show and even one of the man shows in Spain which is no longer annual.

I am really pleased that the National Council supported this unanimously, even with members who did not take part in EAG Online, which in itself was very successful and created a buzz and a boost we all needed at this difficult time.

I am sure if land exhibitors take part we will have more to offer to everyone and more visitors to attend; and that can only be good as EAG is the backbone of the industry”

“Bacta’s decision to invest in its business EAG is no different to millions of other business owners in a range of industries having to put money back into there corporations so they can prepare for a post Covid future.

It’s the smart thing to do and a bold statement that’s is backing the industry.”