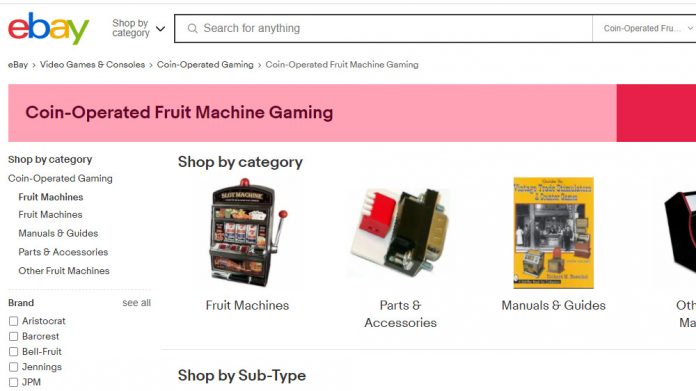 The mainstream industry is stepping up its campaign against illegal machine sales on social media and auction sites. One week after calling on the Gambling Commission to take control of the problem, Bacta has now turned to the police and online platforms to help drive illegal operators out of the marketplace.

The call to clamp down on illegal machine sales online has been widened. Industry trade body Bacta has expanded its appeal for action this week, writing to the Chief Commissioner of Police and, once more, to social media platforms to address the number of unlicensed gaming machines for sale on their auction websites.

Bacta launched its campaign seven days ago when it wrote to the Gambling Commission urging it “to do more to combat the selling of illegal machines over social media marketplaces, auction sites and other online sources.”

A matter raised on numerous occasions with the regulator in the past, Bacta is now moving the campaign forward on a broader scale; its response to the growing disquiet expressed by members at a practice that serves to undermine the reputation of the industry as a whole.

Answering Coinslot’s enquiries about the concerns, John White, Bacta CEO, said: “Obviously the legal and legitimate supply chain far outweighs the illegal and illicit market. But that is not the point. Of course there’s the financial case: every pound lost to the illegal trade is a pound not supporting the sector. But the main issue is the principle. We spend millions making sure our sector meets the three licensing objectives, including keeping gambling free of crime. Our reputation as businesses and a sector depends on it. Fruit machines in their thousands for sale on eBay and Facebook through unlicensed operators is not compatible with our social responsibility obligations.”

Hence the widening of the campaign to address the issue. White continued: “We have submitted a dossier to the Gambling Commission at the highest level. We shall see how they respond. And we’ve expanded our action to other organisations. One of our MSO’s, David Miller, takes responsibility for crime matters and has liaised with police forces on a number of matters over the years with some success. We have now written to the police on this issue and made further contact with social media platforms to address it.”

To date, formal responses from the Commission, eBay and Facebook have not been received by Bacta. However, the association does anticipate a response from the regulator shortly.

The social media platforms? Well, they seem to be a law unto themselves. The likelihood of either eBay or Facebook tackling this issue directly is, on track record alone, extremely doubtful – even given the presence of former deputy Prime Minister Nick Clegg in the senior echelons of Facebook where he has served as Vice-President for Global Affairs and Communications since 2018.

It’s an anomaly not lost on White in what is an arena full of inconsistencies and worse, inaction. He noted: “When we see the social media platforms or dare I say it the Commission or police not taking a tough line with something that is obvious and easily dealt with, you will understand why members get annoyed. They rightly wonder why they bother when all they seem to get is negative criticism and intransigent and unhelpful decision making over pedantic regulation. However, illegal machine sales online can be policed, regulated and stopped.”

Those breaches, whilst not universal, are certainly widespread. According to Bacta’s submitted investigation, whilst there are some legitimate GC licensed operators selling machines – for private use only – on eBay and Facebook, there are significant numbers whose ‘Gambling Commission license’ credentials do not actually exist.

As Bacta’s David Miller said last week: “It would appear that whether knowingly or unknowingly, the major online sales platforms are currently acting as a conduit to illegal activity or aiding and abetting offenders.”

This subject has also been debated vigorously on social media discussion sites where the intricacies of second hand machine sales can be a hot topic. To a number of distributors, sale for private use only, means exactly that. Selling a machine to private individuals is a legitimate market, and both eBay and Facebook, for obvious reasons, serve as a primary route to market.

On the flipside, however, the ‘private use only’ caveat also serves as a convenient cover for unlicensed merchants; both sellers and buyers.

It is a highly emotive debate on social media sites and one even the active participants have found it difficult to agree on. The discussions, though, are certainly being had and considered; it’s just movement on the issue that remains ponderous.

Irrespective, the mainstream industry has decided to act to resolve this thorny issue of illegal machine sales online.

Strange, though, is how hard it has to fight in order to bring those that regulate, promote and police the marketplace into the arena.