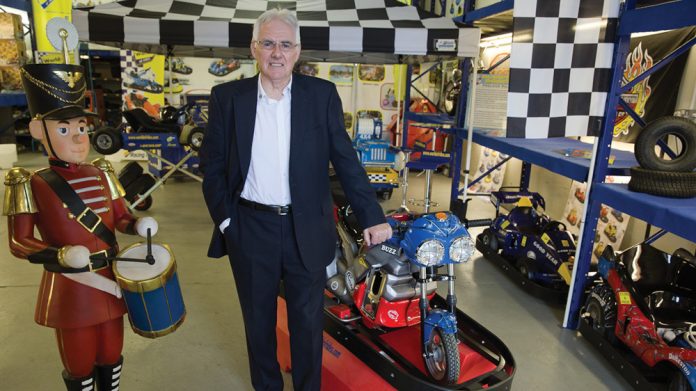 As Britain’s bounding vaccination roll-out brightens the light at the end of the tunnel, operators from all different sectors have been calling on World of Rides to replenish their attractions, with general manager David Robinson convinced that the season to come will kickstart the industry back to life.

Coinslot: Looking across the sectors, where is the main interest coming from for children’s rides? Are you finding stronger interest in holiday parks?

David Robinson, general manager at World of Rides: With the realisation of just how important this season is going to be to all sectors of the UK leisure and amusement industries, our orders have come from every sector so far, but holiday parks and seaside resorts were amongst the very first to size the opportunity to provide their public with the very best products, mainly because of their known popularity with being sited outdoors!

That said, since January 2021 we have received many orders from FEC’s getting rid of their dead areas of old and unprofitable boxes, and we also have a number of customers who are investing in new indoor soft play structure – which was unthinkable eighteen months ago!

CS: With the UK’s high streets undergoing a fundamental overhaul, there is a strong move for leisure and entertainment to be the centre of high street activity. This is pointing to a growing number of FECs, bowling centres and children’s areas in the larger vacant high street buildings. What kind of impact are you expecting this to have on your business and its development in the coming years?

DR: There is no two ways that many leisure and amusement operators will start moving into underutilised retail properties over the coming years, in the same way that the Noble Organisation successfully took amusement arcades to holidaymakers in their own town centres all those decades ago.

But, it should also be remembered that in those days it was almost impossible to walk on the pavements as they were so overcrowded, whereas these days you could almost drive a bus down the pavements without hitting anyone! Therefore, a bit more caution in the short term should be observed.

CS: Brexit: we’re three months in now. What’s your assessment of its impact currently on World of Rides’ business with European customers and suppliers?

DR: Brexit is still at the forefront of all our minds, and we did have some frustrating situations in the early days at the borders during January and February, but as the UK and Europe both adjust to the situation, the movement of goods is becoming much easier, as both factions realise that we are never going back – and the future for both of us is now moving forward together.

We are fortunate in having access to some of the finest and most imaginative designers and technicians in Europe, and by planning and buying well in advance of our needs, we have continued to keep all our existing customers supplied with all their requirements for their pre-season preparations and repairs.

CS: Everything is now geared to a return to commercial normality in June. That’s 18 months of tough times for all businesses in our sector. Can you talk us through how World of Rides managed this difficult time and what impact it had on you? And given where we are now, what do you think the government needs to do for businesses like World of Rides to ensure that the next 18 months are going to be easier for you?

DR: I think that by the time we reach June 2021, most of us will be so busy trying to run our businesses that we won’t even have the time to think about the terrible pandemic that has just gone before us, and the realisation probably won’t really hit-home until after the season has ended, and life begins to slow down again, probably by the end of October instead of September this year!

Those businesses in our industry, that like ourselves, have never allowed themselves to become overexposed financially, will probably continue to serve their customers very well for very many more years, and it was a constant relief to ourselves throughout the pandemic, knowing that we remained in a strong position financially to be able to assist many of our loyal existing customers by allowing them periods of extended credit, and our suppliers by making immediate payments, until they are able to find their own two-feet again.

However, sadly, there are still a great many operators and suppliers who have had to defer payments of rents, rates, VAT and to their suppliers until after they are able to open again, and there may be some further casualties as a result of this dreadful pandemic still to come!

The government needs to extend all its furlough payments, grants, deferred and reduced VAT and loans until at least the end of the summer season, as our industry will not return to any resemblance of normality until long after the all our industry’s doors have been allowed to open once more.

We all need to pull together to help one another through the coming few months!