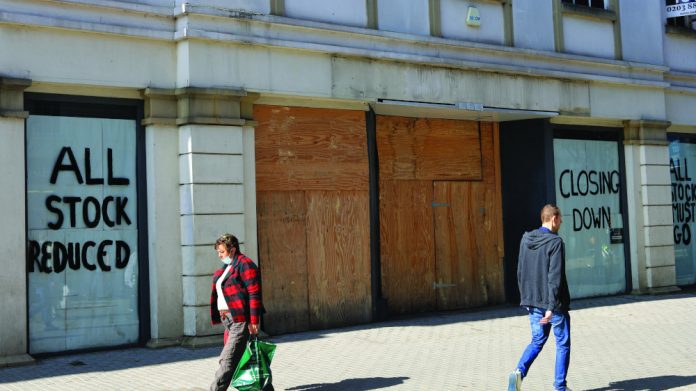 Latest data captures the crisis on Britain’s high streets – but the worse is still to come, according to Accountancy firm PwC.

The scale of the challenge facing high street businesses has been put into sharp relief with more than 17,500 chain stores and other venues closing last year, according to research published by PwC.

Conducted by the Local Data Company which tracks vacancy rates in nearly 3,500 High Streets, shopping centres and retail parks, the net deficit taking new openings into account, showed a loss of 9,877 outlets – the worst annual decline for at least a decade and equivalent to a 4.5per cent annual fall. The figures include hospitality and leisure venues, but not independent retailers with less than five outlets.

Lucy Stainton, head of retail and strategic partnerships at the Local Data Company said: “The damage to footfall in city centre locations, particularly in London, meant that a number of chains opted to temporarily shut irrespective of their essential status. These numbers only include store closures we know to be permanent and when government support schemes end, we expect a further increase in closures.”

She added: “Looking at where this opening and closure activity has predominated really tells the story of changing consumer preferences and shifting demand. On the whole, flagship, city centre high streets and shopping centres saw a greater decline in chain stores versus more local markets and retail parks which proved to be more convenient and perceptibly safer.”

The report argues: “Though we’re still waiting to see the full impact of COVID-19 on stores, we’re certainly seeing its effect on consumer behaviours. And the shift towards working from home is driving how retail locations have been most affected by closures: city centres are now faring worse than suburbs and commuter towns, and shopping centre shops are twice as likely to close as retail parks.”

In keeping with the trend towards localism, Ipswich has set out a vision to become the UK’s first ‘15-minute town’ a concept pioneered by American planning expert Jane Jacobs in the 1960s. Its central premise is that people should be able to live within a 15-minute walk of all the services they need on a daily basis, a theory being deployed to help revive Paris post-Covid.

Terry Baxter, Chair of partnership project Ipswich Vision said: “This is a bold plan which recognises that in the new, post-Covid world, our town centre will need to rely less upon retail and develop a new purpose as a place to live and visit.

“This new strategy for Ipswich commits to many more people living centrally and having around them all that they will need to live their lives locally.

“Not only have all partners signed up to the strategy, but we also have £25m from the government’s Town Fund to help kick-start the revival.”

Professor Dave Muller, chairman of the All About Ipswich destination management organisation, added: “The leisure, entertainment and hospitality sectors have been hard hit by the pandemic. But, as businesses in and around the town start to reopen, they will recognise that this plan will help to define Ipswich as an accessible, convenient and connected place to visit and stay.”