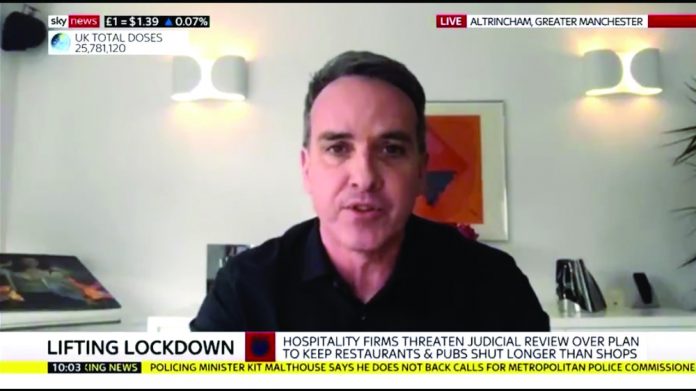 Britain’s hospitality sector has reached the tipping point; legal action will be mounted this week by the night-time economy sector and independent pub operators, both determined to bring the reopening date forward from 17 May. In the meantime, Bacta still awaits an official response to its own solicitor’s letter on behalf of AGCs. Is the government beginning to lose the people?

Thursday morning saw procedures commence on seeking a judicial review at the high court for the hospitality sector to reopen alongside non-essential retail on 12 April.

Confirming the decision to go to court, Sacha Lord told the Today programme that the government could give no supporting evidence for its decision to defer reopening for indoor hospitality venues, and that there was no other option than to proceed to a judicial review.

The technicalities of the hospitality sector’s case had already been laid out to the government in a formal letter. It stated: “Discrimination and unsubstantiated beliefs, rather than facts, science and evidence, lie at the heart of much of the Government’s approach to hospitality, and these wrongs need to be righted”.

The crux of the case was direct; the pair wanted the government to consult SAGE on “whether it is justifiable to prevent the hospitality industry opening whilst, at the same time, allowing non-essential shops to open (when the risk of transmission is plainly higher in non-essential shops).”

Lord was quick to note during his radio interview that the case was not hospitality versus non-essential retail; it was about inconsistent application of evidence at best; the lack of any evidence at worst.

Both Lord and Osmond argue that the hospitality sector has invested substantial funds installing Covid-secure measures, under government guidance, and that these businesses have spent “tens of millions of pounds” making their venues safe in accordance with the conditions required. Further, the indoor venues are regulated and controlled, customers are seated and served at tables. There is no ”swerving in and out of shops”, Lord noted.

There was also no evidence to back the government’s decision. That was clear during a parliamentary committee meeting last week when the government was accused by politicians of “moving the goalposts” when it came to reopening plans.

“We feel the industry is safe to operate under these conditions,” Lord said. But, messrs Lord and Osmond will take note of Bacta’s experience whose own solicitor’s enquiries, presented two weeks ago, remain effectively in purdah.

“The government has dug its heels in,” Bacta’s chief executive John White told Coinslot. “It refuses to provide a rational argument for keeping AGCs closed when all other retail shops on the high street can open. The decision does not appear to be based on any evidence that we can detect and we raised this point forcibly when we met with the new minister John Whittingdale on Wednesday.”

The outcome of that meeting will not have shifted government policy towards an April 12 reopening; what it will do is provide further stark evidence of the financial pressures on a sector pushed to the very edge, on the basis of no credible evidence that stops it from trading.