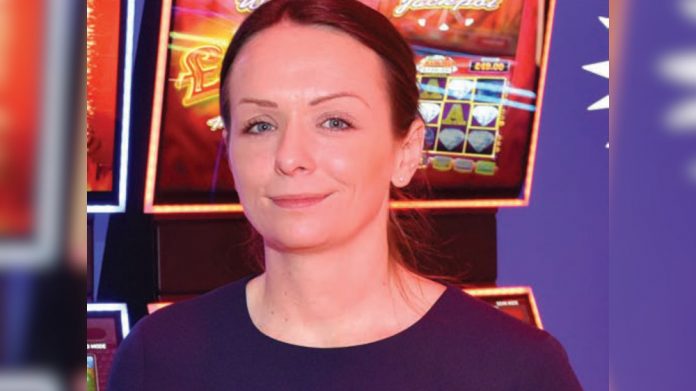 “….we need to remove the stereotype that gaming is for men, and get with the reality that women are our players too”

Nicola Wallbank, Head of Corporate Accounts at Blueprint Operations, is right at the heart of the most competitive area of any industry – the sales division. And she thrives in the environment; this is no place to be “a prisoner of convention” she argues. We need to “explore how we change things for the better.”

Coinslot: You’re in a perfect position to challenge things that are holding us back. What do you think are some of the most important obstacles to the development of women in business?

Nicola Wallbank: The obvious and most pressing issue is to be treated equally.

Women are often held to higher standards than their male counterparts and in many ways it’s an uneven playing field out there which leads to a fear of failure and to a degree, imposter syndrome.

I also think there’s a widely held view that women can’t have it all and need to choose between a ‘successful’ career and a family.

Narrowing it down to the gaming industry we need to remove the stereotype that gaming is for men, and get with the reality that women are our players too.

Coinslot: You have worked in the industry for many years and also featured in numerous business initiatives. How has the public response to you changed in this time? Are you a woman in business or a businesswoman – an important distinction given that men are only ever considered businessmen?

NW: I see myself as a businesswoman, but I believe I am regarded as a woman in business.

I think for women working within the retail side of gaming the environment has improved but there’s still work to be done if we are to even out the playing field.

Coinslot: Which people have influenced you most and where have you gained your inspiration?

NW: Growing up in the 90’s taught me that everyone has the right to have a voice: we should truly just be ourselves, not conform to how we are perceived or expected to behave.

I have been fortunate to work around successful businesswomen since my very first days at Sceptre Leisure and that has continued throughout the various roles I have held, however my inspiration and motivation comes from wanting the very best for myself.

Coinslot: International Women’s Day is all about female trailblazers and handing their experiences on to other women. In your career, what key experiences would you like to pass on and are you seeing significant change for younger women in business today?

NW: First and foremost, it’s essential that we all believe in ourselves.

Never take no for an answer and keep questioning/ pushing for more.

If as women we continue to challenge and push back against the psychological barriers and the bias that exists against women there will be more opportunities for women within business.

Coinslot: Looking back, what have been your best and not so best (!) experiences as a businesswoman?

NW: The good experiences are definitely watching women raise each other up, working together not against in order to achieve great things.

The not so best would be being undervalued compared to my male colleagues in the same roles.

Coinslot: What changes do you want to see evolve over the next few years for both women and the new wave of business people – both men and women?

NW: I would like to see people giving others more of an opportunity. Just because someone doesn’t have five years of experience or have a first-class business degree it doesn’t mean that they won’t be successful or apply themselves effectively or professionally.

Secondly, we don’t have to live by outmoded and irrelevant stereotypes. I’m a great believer in not being a prisoner of convention and exploring how we can change things for the better.