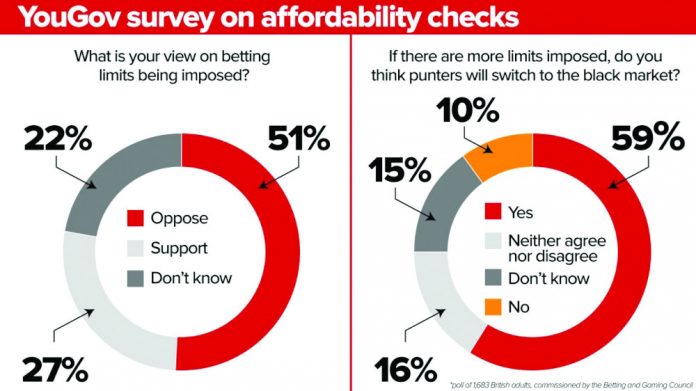 A YouGov poll and focus group research undertaken in key constituencies demonstrate the public’s opposition to affordability checks and the dangers posed by the illegal black market.

The Betting and Gaming Council is mounting a powerful and timely campaign to head-off the introduction of affordability checks amid controversial calls for a £100 limit on the amount that punters can lose in a month.

The organisation has commissioned a series of research-based initiatives including a programme of focus groups with voters held in so-called “Red Wall” seats across the Midlands and the north of England, to explore their views on betting and wider cultural issues. Many of these areas were among the 50 seats across the North, Midlands and Wales which switched from Labour to the Conservatives in 2019, helping to hand the Conservative Party an 80-seat majority.

In a rebuke to the antigambling lobby, who accuse the industry of “normalising” gambling, they showed that betting is already a normal social and leisure pastime for millions of Brits. They also found that voters in those seats are wary of post-Covid mission creep, with the state wanting to impose more control on how they live their lives.

The other part of the BGC’s campaign has involved a YouGov survey conducted among a poll of 1,683 British adults which found that 51 percent are opposed to limits set by politicians, compared to just 27 percent who support them.

In a broadside across the bows of the Gambling Commission’s flagship affordability proposal the YouGov poll also found that 59 per cent of UK adults agree that “if there are too many limits placed on people to bet”, they will shift to the unlicensed and illegal black market, compared to 10 per cent who disagree.

A PwC report last month revealed that the number of British punters using black market sites to place bets has increased from 210,000 to 460,000 in just two years, while the amount staked with unlicensed operators had doubled from £1.4bn to £2.8bn.

Black market sites have none of the safeguards required in the regulated sector, such as ID and age verification checks, the ability to set deposit limits and safer gambling tools.

Michael Dugher, chief executive of the Betting and Gaming Council, said: “I hope politicians will….take heed of the findings and listen to voters in Northern and Midlands marginal seats – who will be key to the result of the next election – who are wary of being told by Westminster how to live their lives, especially in the wake of the Covid pandemic.

“The BGC fully supports the Gambling Review and we want to see big changes, but it’s important that ministers get those changes right.”