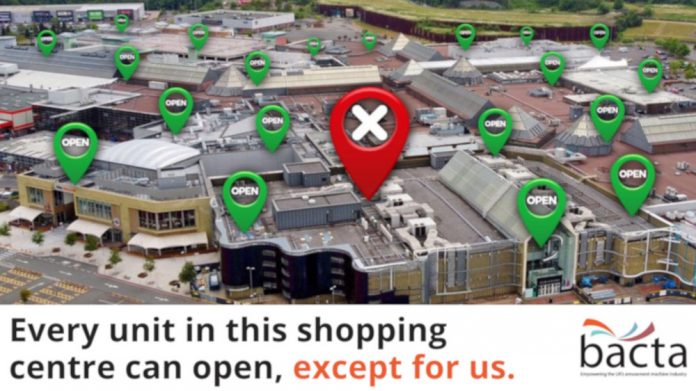 While bookmakers and other non-essential retail businesses prepare to open on 12 April, Bacta has decided to take legal action over the unfair, and in the trade association’s opinion “illegal”, decision to delay AGC’s from reopening until 17 May.

Bacta has instructed global legal firm DWF Law to challenge the thinking behind the delayed reopening of AGCs after all other nonessential retail businesses.

In a strongly worded letter to Oliver Dowden, Secretary of State for Culture, Media and Sport, DWF Law stated that “Bacta had hoped it would not need to subject the decision to legal scrutiny and/or challenge, but it simply cannot ignore the decision’s discriminatory impact and the long term hit to the AGC industry which would flow from it”.

While noting that the events surrounding the pandemic are of course unprecedented, the letter continued to make the claim that “the government is still required to exercise its decision-making rationally, in a non-discriminatory way and in accordance with legitimate expectations”.

It goes on to point out that the decision to delay opening of AGCs is irrational as they have proved themselves to be COVID-safe, there have been no reports of infections arising from the use of these premises, and they usually have few customers in the premises at any one time. The discrimination against AGCs is further highlighted by the decision to allow LBOs to open earlier.

“Our client has never been told any good reason why the disparity of treatment between LBOs and AGCs exists,” continued DWF Law. “It therefore remains plain that the disparity is not based on any good evidence justifying it. Even when the point was specifically raised as a Parliamentary Question, tabled on 19 February 2021, Nigel Huddleston MP only noted that the ‘roadmap has been informed by the latest scientific evidence and seeks a balance between our key social and economic priorities, while preserving the health and safety of the country’. That response does not, however, provide any real clarity on the point, nor does it explain the disparity of treatment, in particular, between AGCs and LBOs.”

John White, CEO of Bacta, commented: “We are doing everything we can to focus attention on the unfair, and we believe illegal, treatment of AGCs in the reopening roadmap. The decision to prevent this one venue on the High Street from opening with all other retailers is not only discriminatory, evidence for it is absent and it lacks any logic. We have decided to take legal action and were heartened by the Government’s U-turn following the Sacha Lord case, where the Greater Manchester nighttime economy advisor brought a court case against Matt Hancock on behalf of the hospitality industry and won. This case also mentioned the discriminatory impacts of closure decisions as contributing to the Government’s decision being unlawful, as did the complete lack of evidence to justify it – in this case the requirement to have a substantial meal with a drink when the tier system was brought in, which Lord successfully argued discriminated against certain ‘sections of society’ as thousands of pubs were forced to close.”