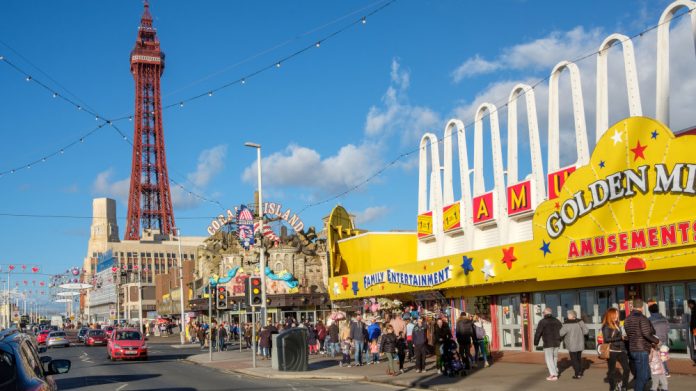 As Blackpool Council look for a new operator for the Golden Mile Centre, local newspaper The Gazette has taken the opportunity to look back 52 years at its early days on the seafront.

As Blackpool Council opens a tender seeking operators for the Golden Mile Centre, the Blackpool Gazette has taken a trip down memory lane looking back over 50 years to the opening of the iconic attraction.

Hailing the centre as “the jewel in the crown” in the seafront parade, local historian and former-employee Barry McCann took a nostalgic look at the centre’s first days providing entertainment and amusement back in 1968.

“Owned and operated by the Blackpool Tower Company, its spacious state-of-the-art two-storey building housed both amusement attractions and fun fair rides under one roof, making it the perfect destination for those rainy days,” noted McCann.

“The new facility was carpeted, bright and spacious, and catered for all tastes. Its ground floor formed the huge arcade section with the latest slots and gaming machines. There were also a couple of children’s rides, initially a mini carousel, flying Comet Jets and a rotating Dalek squawking “Exterminate!””

The centre also featured a cafe and Essie’s Bingo, with an escalator leading to the high-ceilinged first floor, with panoramic views of the Fylde coast.

“This was the perfect setting for the indoor fun fair and was able to house all the classic rides such as a full size carousel, waltzer, Dodgem cars, helter skelter and a double decker “Roller Ghoster” with its big dipper style drop like the ghost train at the Pleasure Beach.”

“This operation also over spilled into an outdoor area at the side of the building to include children’s rides such as the bumpy Astroglide slide, a miniature big wheel, carousels, and a small roller coaster.”

Still as popular as ever in 2010, the centre was acquired by Blackpool Council alongside Louis Tussauds, the Tower and the Winter Gardens in a £40m deal, with the authority now looking for an operator to lead the complex into its next 50 years.