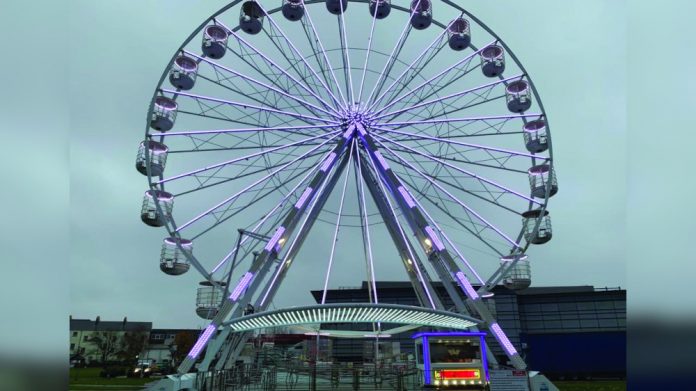 Clacton Pier and the seaside town’s Pavilion continue to go head to head in the race to install a 30m observation wheel, each determined to mark the town’s 150th anniversary with the resort’s new centre-piece attraction..

Clacton’s battle of the big wheels has taken a further turn, as Clacton Pier and Clacton Pavilion both announce the next stages in their plans to install 30m observation wheels this year.

With the pier submitting a planning proposal to Tendring District Council this week, and the pavilion confirming construction of its wheel is nearing completion, both venues are racing to bring revolution to the seafront.

Of the pier’s statement of intent, director Billy Ball was in little doubt. “We must continue to invest in improving our offer to maintain visitor numbers and to sustain the revenue that is important to retain the Pier as a vital heritage asset,” he explained.

“The Pier – which was the first building in the new town of Clacton – is 150 years old this July and the wheel, alongside other new attractions such as the new Looping Star, is a great way to mark this historic anniversary.”

As TDC considers the pier’s planning proposal, Clacton Pavilion has confirmed that its own big wheel is turning; the visitor attraction could be ready to install before March this year.

“We are pleased to announce the construction process and final stages of testing are coming to an end,” a spokesperson told local newspaper The Gazette. “The wheel is ahead of schedule for delivery to the UK at the end of February.”

Though observation wheels have demonstrated their worth and popularity time and time again on the British seaside, it is unclear whether TDC would be willing to see two similar-sized attractions erected in such close proximity to one another.

Though Clacton Pier noted that the addition of a wheel has been part of the landmark’s long-term business plan since the Ball family took over in 2009, Clacton Pavilion could have the edge simply by completing construction before its rival.

Whichever attraction installs its wheel first, the race to revolve proves that ambition, dedication and innovation are still alive and well in British seaside attractions industry.