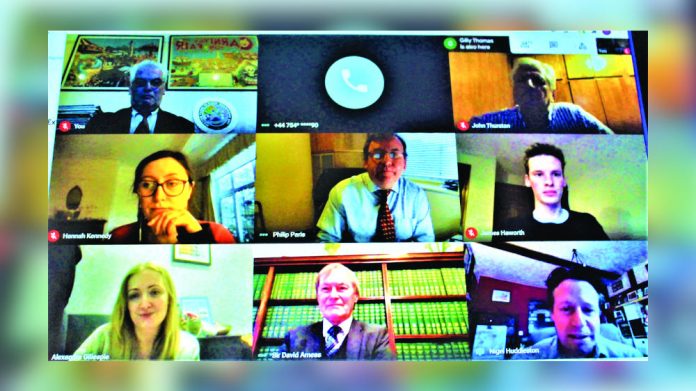 A meeting between the Showmen’s Guild of Great Britain and DCMS undersecretary Nigel Huddleston ended in a pledge that the department would continue to press for increased financial support and recognition for showmen put out of work by the pandemic.

The Showmen’s Guild (SGGB) has been assured by senior figures in Westminster that they continue to lobby on behalf of the guild to ensure that showmen are eligible for grant funding throughout the Covid-19 pandemic.

The SGGB met virtually with undersecretary for heritage Nigel Huddleston, alongside chairman of the All-Party Parliamentary Group for Fairs and Showgrounds Sir David Amess, earlier this month: following the conclusion of December’s successful Parliamentary Adjournment debate in which Huddleston had pledged to write to the Local Government Minister and ensure that showmen would not be excluded from LADG eligibility.

The latest meeting saw Huddleston confirm that he had been true to his word and sent the letter, and had also reached out to chancellor Rishi Sunak: pressing him to “look positively” on the showmen’s submissions to the Red Diesel tax rebate consultation.

In another significant development, Huddleston promised to press business minister Kwasi Kwarteng to add “Showmen” as a recognised category for business support grants – in line with the measures already in place for market traders.

“Understanding the difficulties showmen experienced in applying for grants, the minister advised showmen ‘to apply anyway,’ especially as the grant fund has been topped-up recently,” reported SGGB president Philip Paris. “Indeed, he assured us that ‘all discussions are live,’ which crucially includes an ongoing conversation with the Treasury.”

Meanwhile, Paris and his senior vice president John Thurston underlined to the Westminster delegation the fact that showmen are frequently “sole traders, not companies,” and such many were not VAT registered nor do they operate any rateable premises. As such, huge numbers of showmen had hitherto “fallen through the gaps” of the government’s business support effort – a fact which the SGGB said Huddleston said he now “understood.”

Indeed, the heritage minister even agreed to lobby on the guild’s behalf in convincing Local Authorities to allow fairs and other events to re-open “as soon as possible,” as long as they meet social distancing and other Covid-19 mitigation guidelines.

The meeting concluded with further assurance from Huddleston that both the Showmen’s Guild and the wider fairground industry was “very well represented in parliament,” and said that the industry’s voice was appreciated “better than you think” by key legislators.

“We will do what we can for you, when we can,” he remarked. “We want as many showmen-led operations