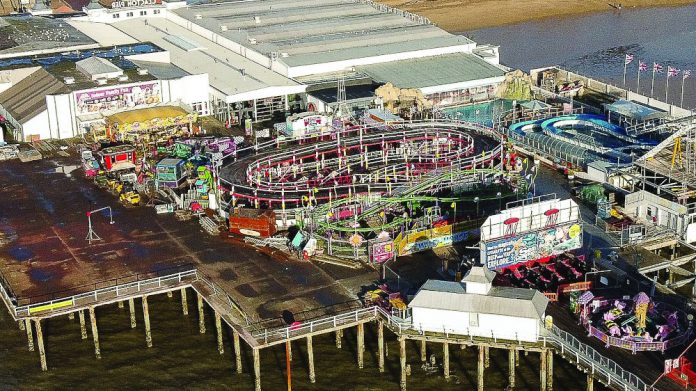 After Clacton Pier was hit by storms both literal and metaphorical in 2020, the Tendring landmark’s owners are looking ahead to a brighter, busier new year. Billy and Elliot Ball explain.

The owners of Clacton Pier have stated they have “confidence and optimism” for 2021, with new rides, seasonal events and a major anniversary celebration in the pipeline.

With 2020 opening on a dramatic pier collapse, and ending with the pier’s third closure in the space of nine months, Billy and Elliot Ball are looking toward a more positive new year.

“There have been many negatives but also plenty of positives during a period which has been incredibly difficult for many businesses in Tendring, especially those like us in the leisure and hospitality industry,” said director Billy Ball.

“On a high note, we were named Pier of the Year in 2020 for the first time ever – but what a year it turned out to be. There were some real lows, but we are bouncing back with a lot of confidence and optimism about where we are going next.”

With the ride deck now restored after its 14 February collapse, preparations are underway to install the much-anticipated Looping Star roller coaster in time for the summer season.

“It is a significant project but provided everything goes well we should be able to hit our target. The Paratrooper – which has been on the pier since 1975 – and the Go-Gator which arrived in 1988, will both be moving on to make room for the Looping Star and there are other new attractions in the pipeline.”

“It is always good to freshen up the ride offer and that is what we have been working on since we completed the indoor development, which included Discovery Bay soft play and Adventure Island Golf course. The Log Flume was added this summer and has proved a big hit and there is more to come.” The expanded ride offering will prove crucial to helping the pier recoup some of the losses accrued last year as a result of Covid-19 restrictions, with Ball noting that the pier came perilously close to falling one year short of a major milestone.

“Without the support of the Government and its furlough scheme and our bankers it could well have been the end,” said Ball. “We also have to thank our loyal customers and suppliers who supported us through these tough times as we could not have done it without them.”

“You could say we have been hit by many storms in 2020, but it is time to look forward to celebrating both the pier and Clacton’s 150th birthday in 2021.”