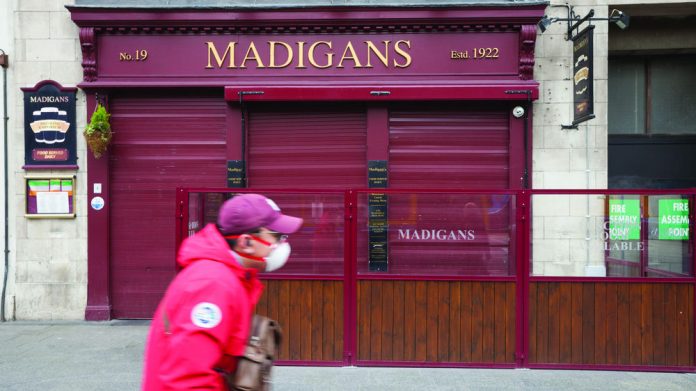 The British Beer and Pub Association has warned of pubs being “lost for good” if Westminster imposed a shutdown until May without additional funding.

As rumours continue to circulate in the press that pubs in Britain will be forced to remain close until as late as May, the British Beer and Pub Association has responded by urging the government to extend financial support to the sector in order to maintain any prospective elongation of lockdown.

A press release from the trade association warned that many pubs would be “lost for good” if dealt the double-whammy of an extended closure order alongside any cut off of financial aid from Westminster.

“If pubs are forced to stay closed until May, it would mean they have faced 14 months of lockdowns and restrictions,” remarked the trade association’s chief executive Emma McClarkin. “UK pubs will be screaming ‘mayday’ long before a May reopening without significantly more financial support from government.”

The trade chief went on to say that if the rumours were substantiated, they would be yet another example of Westminster “unfairly targeting pubs,” and called on legislators to clarify what lies in store for pub stakeholders in the months ahead.

“The government has a duty to tell publicans when it plans to let them reopen with a clear roadmap alongside the vaccination programme,” she said. “If it won’t be until May then it needs to extend financial support for them to survive and to brewers whose businesses also face jeopardy.”

“In the more immediate future this means an extension to the chancellor’s latest grant support package and not just for pubs, but also breweries,” she continued. “In the longer term it means extensions to the business rates holiday and VAT cut, as well as a beer duty cut throughout 2021 and beyond.”

McClarkin went on to argue that pubs are “safe places to socialise” and that the pub sector plays a “important role in our social and economic recovery.”

“We really hope that the speculation about pubs being forced to stay closed until May is not true,” she surmised. “Without support, local pubs in communities across the country will be lost forever.”

UKHospitality has warned the reported closure of pubs until May is “simply unviable,” calling on the government to provide further support for businesses affected by the third lockdown.

With The Sunday Times reporting recently that May Day bank holiday is “more likely” the date pubs – and leisure and entertainment venues such as amusement centres and arcades – will re-open, the trade body urged for an extension of support measures.

“If pubs, bars and restaurants are not able to open until May then they will have actually been closed for seven months,” said UKHospitality CEO Kate Nicholls. “With one in five running out of cash by March, even with Government support, that is simply unviable.”

Focusing on the pub sector in particular, she added: “If pubs are going to be closed until May, whether that’s entirely closed or operating under restrictions, then there is going to need to be more in the way of financial support. Otherwise, some businesses are not going to survive until May to re-open.”