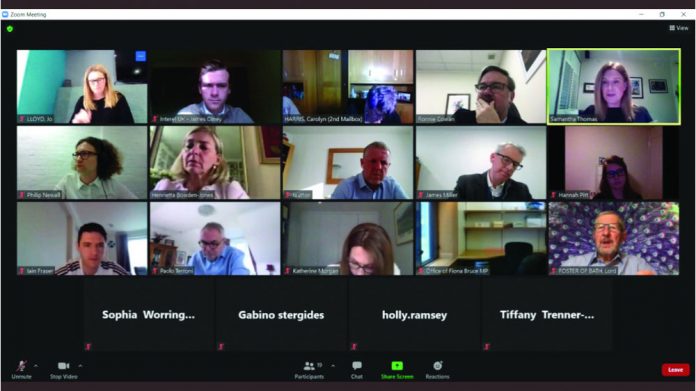 Bacta has always prided itself on the relationship it has with the membership. And in a somewhat perverse twist, this engagement seems to have flourished under Covid-19 conditions. Chief executive John White talks to Coinslot about how, in the worst of times, the association has managed to get the best from its members.

When news first broke of Phizer’s Covid vaccine breakthrough , share prices for Zoom plummeted nearly 20 percent. It seemed the bottom was falling out of the online conferencing platform.

How wrong the markets were. The poster boy of the home working generation, the far sprung global (and national) organisations looking for instant face to face connection – there’s a lot more Kapow! Wham and Bam! left in Zoom’s networking locker.

And no one is more enthused by the opportunities than Bacta; Zoom has done much to help re-energise the association’s engagement with members.

He would know. Just one day earlier the trade body had staged its first ever online Annual Convention, a transition of necessity due to the government’s new and restricted tier regime.

“Before Covid, it was all about travelling around the country, attending the regional meetings – and that was great and will never be replaced. But now, everyone’s had to adapt to a new way forward and networking initiatives like Zoom have helped us maintain that dialogue at a time when we have needed to speak to people more than ever,” he noted.

Lockdowns, semi-lockdowns, travel restrictions, quarantines, business closures – it’s all been part of the daily routine for White, his team and, most importantly, his membership. They have each required and provided crucial information throughout the year as the industry battles against inconsistent and varying Covid measures impacting on businesses.

White picked up the story. “As an association, collecting views is part of our everyday activities. But new systems and technology have enabled us to fast track all this and it’s been vital. Take Wales for example. During one zoom session, we found out about environmental officers who were looking at arcades. We got very good feedback and anecdotes from the members. It was significant information.”

White continued: “And earlier in the year we were speaking to people about problems with Welsh local authorities looking to reclaim grants they’d made to AGCs. Your readers will know about this – Coinslot’s been highlighting these stories on many occasions. But the conversations we had and information gathered was really helpful. People like Emma Jenkins in South Wales who gave first hand experience of the varying treatment of her business by different councils. It gave us something really effective to work with.”

Effective is somewhat questionable; this is, after all, the Welsh government we’re dealing with. The Drakeford office is not a particularly embracing one. But, to its credit – and technology’s as well – the Welsh department was prepared to go zoom face to zoom face with Bacta on specific issues the association had unearthed from its members.

“I don’t want to position zoom as a saviour – it is just a networking platform. But what it’s allowed us to do, the speed and access it’s offered us; it’s added a new dimension to how we work. On that occasion we went directly to the WG and put our questions to them. That would have been unthinkable pre-Covid. It would have been letters, visits and all very time consuming.”

Bacta has been mastering the online connection for nine months now. Its Spring and Autumn round of regional meetings have all been staged on zoom, bringing the association’s management team right to the heart of local issues.

“One thing we’ve found in this process is how the immediacy has really played its part. It’s great meeting face to face and we all know you can’t beat that. But over a series of zoom meetings you notice patterns emerging much quicker – like car parking issues with local authorities. Normally you’d meet one region and then travel across to another over a period of a week. But recently, because of Covid, we’re in the office, organising the meetings more closely together and picking up on patterns and trends a lot earlier. Which means we’re able to act on them much quicker and lobby government with a much wider information base.”

White was quick to note some of the contributions: Jason Jarrett of AMS on problems around single site operation in Sussex and Kent; Terry Jones from Whitby in the North East region who highlighted the local authorities approach to FECs re-opening in the earlier period; Kevin Birch in the Midlands who raised concerns over the behaviour of the banks in the early days of CBILS/Bounce back loans; and Willie Halliday pressing concerns on the impact of the music ban in Scotland on pubs and jukeboxes.

And the pulling power of zoom is an interesting change as well. White has noticed an uptick in engagement. “I’d say close to one and hundred and fifty members have been involved on the zoom conferences through the regions and divisions over the past few months. It’s been really important not just at the central office end, but around the country. It’s crucial that members can talk to their association and challenge it – and this year, especially because of Covid, our members have been taking these challenges head on.”

And that goes for external bodies as well. One area that has changed dramatically is the exchange between Bacta and other stakeholders in the industry. “It’s fair to say that zoom has enabled us to engage with the Commission, the DCMS, politicians and other trade bodies far more frequently and speedily than ever before. It’s been a major boost to conveying our messages. We may not be listened to all the time, but we are being heard.”

Which probably explains why online conferencing will take a more prominent role in the Bacta comms programme during 2021 with plans to keep the regional and divisional meetings online already in motion.

“We don’t want to replace face to face meetings once they’re deemed safe to reinstate, but there’s a cost and speed benefit to zoom meetings that we cannot overlook. Everyone’s talking about the new normal – and for us, zoom meetings won’t replace what we do, but they will certainly be a major part of it.”