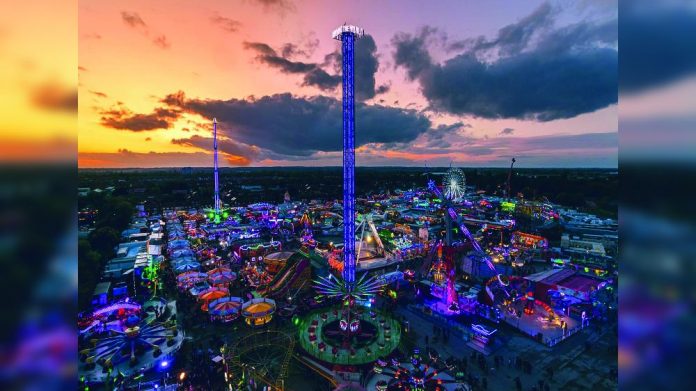 Travelling fairs are facing a potentially catastrophic financial crisis, brought about by a combination of Covid, the refusal of some local authorities to issue licenses and the fairground’s unwelcome status as ‘a forgotten industry’. Bernice Wall, Hayley Danter, Narvenka Noyce, Nicola Hill, Joannie Peak and Colleen Roper are a formidable group of six women working to change all that. Their mission is to educate policy makers, politicians and the public about the unique and brutal set of challenges facing the country’s travelling fairgrounds. The ‘Ladies from Future 4 Fairgrounds’ are a force not to be taken lightly.

Can you begin by outlining the background to your campaign and what you are trying to achieve?

“Obviously Covid is a huge issue for every part of the economy and the vast majority of businesses have had access to various forms of financial assistance. However, fairgrounds have fallen through the net at many stages mainly because we are self-employed but also because we don’t have rates. After the first lockdown when the government gave us the green light to return, the local authorities, mainly the county councils, seemed to override that and despite the fact that we were Covid compliant refused us permission to open. This was despite the fact that other businesses such as markets, were given permission to use the very same sites. They would stop us but allow similar size businesses to open. There need to be clear guidelines in relation to fairgrounds, they need to apply throughout the country and be treated equally because there’s no difference between us and the way people visit an open-air market, a pier or a theme park. We are only asking for a level playing field.” A recent article in the Daily Telegraph suggested there might have been a hint of cultural discrimination behind these decisions. Is that accurate?

“It’s a question that needs to be asked as it has gone on for many years against travelling showmen and this year has especially brought it to the fore.”

How did the public react to not being able to use the fair?

“The general public were very supportive when they learned that we couldn’t open. The public had visited their fairs year after year. We are part of their community and we have built solid relationships with them. We bring something to the community in these dark hours as fairgrounds did during the war years. People need that breath of fresh air, they need to let their kids have some fun and enjoyment, so they were as disappointed as we were being refused the permits to open.”

The Showmen’s Guild has had a significant political lobby – have you been able to harness that support for your campaign?

“We are all extremely proud to be a part of the Showman’s Guild: in many ways, we are just another branch of the same tree. We are in contact with many MPs and we have recently spoken with James Wild the Conservative MP for North Norfolk. We are hopeful that more MPs will ask questions on our behalf. How serious is the financial challenge facing the business?

“We are often told that Covid represents the biggest crisis to face the country since the second world war. A lot of showmen went to fight for their country and never returned – but if we are talking purely financially, we are facing the biggest challenge of any time in our history. Even through the war the fairgrounds were open at the government’s request in order to entertain the people of this country. At the moment, everybody is just hanging on by their finger nails. Our sons and husbands are working elsewhere just to tide us over, because the payments haven’t stopped and the cost of living hasn’t stopped. Financially this is the biggest thing to happen to fairgrounds.”

You refer to yourselves as a support group but why is the group made up only of women?

“Women are the ones who worry about the future. Women also hold the purse strings. We were increasingly concerned about the situation and looked at our European counterparts for inspiration. Everyone is under pressure financially and mentally. We’ve received great support from our families, from the showmen and ladies who have been appreciative that we wanted to do something. The financial situation has been brutal and the fact that we have been putting in time and effort has been welcomed; it has been very positive. And we as women have a more pivotal role to play.” What are the key messages that you want to get across to the public?

“We are working with a PR company to make sure that our concerns are presented properly and professionally because it’s very important that we get it right. Our message is about awareness. It’s a positive campaign and we want to make certain that we are representing the travelling showmen, our community, in the correct light. We want to get back to work next year and we think presenting a positive image is key to the public supporting the fairgrounds. The article that appeared in the Daily Telegraph, was a really positive piece and helped to educate a readership that would probably have been unaware of our industry. To some extent we are a forgotten industry and we need to put ourselves back on the map.”

Campaigns need aims and deadlines – what are yours?

“First and foremost, we want to help get the fairs back up running and on the road for next season. Kings Lynn Mart Fair is traditionally in February, the start of the Showmen’s calendar, there is not a great deal of time as 2021 is fast approaching, so we have to work fast. The majority of the fairs have Royal Charters granted by the monarchy. Her Majesty Queen Elizabeth II visited Kings Lynn Fair and was quoted as saying ’Showmen are a kingdom within a kingdom and you are to guard it well.’ Next year’s fair will be celebrating its 817th year. There’s lots of photographs of members of the Royal Family at fairgrounds including the young Princes William and Harry. In the early part of 2020 before Covid, Prince William brought his children to the fair – so we think we may have some Royal support!” Have you got any other influential or famous supporters?

“We are getting a lot of support on social media with many likes and retweets. Actors Larry Lamb and David Walliams both traced Showmen heritage when they appeared on Who Do You Think You Are?. Also, David Essex is an Honorary Member of The Showmen’s Guild.

What are your final thoughts and how can Coinslot readers help spread the word?

“Clearly the main aim is to get back to work as soon as possible and to be treated fairly by both national and local government. Covid has shone a light on how little awareness there is about Showmen and travelling fairgrounds – as we said earlier we are a forgotten industry. There aren’t many businesses that go back eight generations, we have a unique way of life and present a professional business that is often misunderstood. It is one that we are very proud of and feel it is worth fighting for.

#Future4Fairgrounds is a very small cog in a much bigger wheel. Other organisations within the industry like The Showmen’s Guild, AIS, SIRPS, ACES, are all working hard for the same goal. To support F4F please follow us on social media, support the fairgrounds, message your local council and ask where your local fairground is and speak to your MP.”