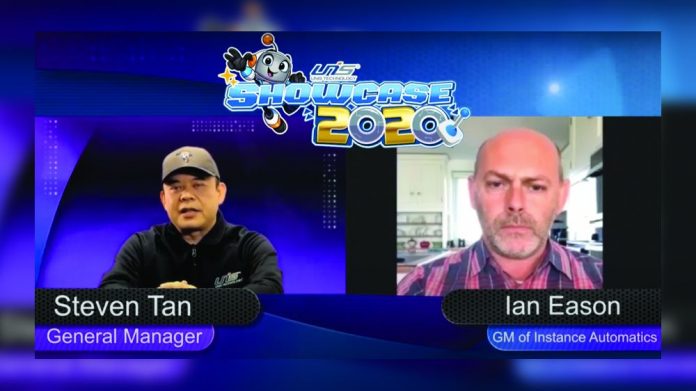 With a long and fruitful relationship as distributor for China’s UNIS Technology, Instance Automatics didn’t let a pandemic stop them from chiming in to the company’s business discussion about how amusements are adapting to the new post-pandemic paradigm.

Ian Eason of Instance Automatics made a successful appearance at Chinese amusement manufacturer UNIS Technology’s digital trade show this weekend, where he detailed how his company had adapted its business model in wake of the ongoing pandemic.

Having served as a UK distributor for UNIS since 2012, Eason joined the company’s online event via Zoom, where he took part in a Q&A session with general manager Steven Tan.

“We looked in March at maybe laying all our staff off because there was zero business,” Eason admitted. “But then we diversified into selling and making PPE dispensers and sanitiser dispensers…we got into anything and everything we could to keep the business turning.”

According to Eason, it was in this way that Instance was able to keep all of its staff in work, and buy itself time to think about what the future might hold once Coronavirus is a thing of the past. One thing Eason is almost certain of is that operators are likely to be highly selective in their new investments for the 2021 season.

“I think there’s going to be a lot more thought about what people are going to purchase next year,” he remarked. “And whilst that sounds like it’ll be challenging for distributors, I think overall it will probably be a good thing for business efficiency.”

“People are having to think a lot harder about the faults they have in their business models,” he explained. “This pandemic, and its aftereffects, will simply force people into steering their companies in the direction of making more money.”

All well and good, but with in-person meetings and trade shows a thing of the past (for the foreseeable future, seemingly), how are potential customers supposed to weigh up the merits of a prospective new product? Eason conceded this presents a new obstacle – but argued that following UNIS in shifting trade events online was a smart stop-gap solution.

“It’s going to be very difficult for the buyers to look at products without in person trade shows, because so many of the products we sell are touchy-feely…people like to see and play the product,” he explained. “I think what UNIS is doing is revolutionary – I don’t think anyone else has jumped on the bandwagon yet. It’s a simple way of getting products in front of customers.”