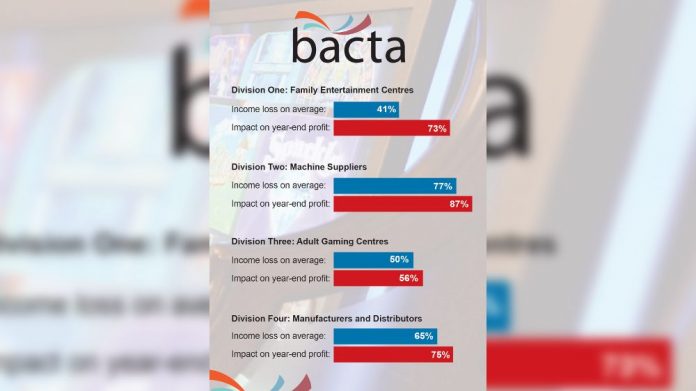 The impact of lockdown, frequent government revisions to policy and the costs of implementing Covid-19 measures has hit the amusements industry hard. A survey of Bacta members has shown all sectors of the industry have suffered, but none more so than the machine suppliers. Almost 90 percent of their year-on-year profits have been cut, so what kind of future does UK machine supply and manufacturing have going into 2021?

In the famed words of quiz show Family Fortunes, ‘we asked hundreds of businesses in the amusements industry how Covid had impacted on their revenues; and our survey said?” Terrible.

A Bacta poll of its memberhip has revealed a torrid tale of misfortune for the 600 plus businesses it represents across multiple gaming genres and operations up and down the country.

No part of Britain, nor any part of the industry emerged from the survey in a healthy state – at best, FEC members expected to average around a 41 percent loss of income; at worst, machine suppliers were heading for an average 87 percent loss on year on year profit.

The fact that the industry went into the Covid meltdown in a pretty parlous state provided a dark canvas at the start of the problems back in February/March. But eight months on, permanent lockdown, temporary lockdown, regional closures, stringent and strangled Welsh and Scottish government policies – the storylines have been spectacularly grim.

2020 has not been a vintage year for the industry and the Bacta figures reflect the precarious state of play.

For machine suppliers, the backbone of the UK manufacturing sector, it is dire news. Businesses expect to lose more than three quarters of their income – which given the logical conclusion that during the first lockdown barely a single machine would have been sold in those 18 weeks, may seem a slightly rosy response. The black rose, however, comes in the shape of an 87 percent expected decline in year on year profits.

That’s a thorn in the side of the industry. “This is not a happy picture,” said John White, Bacta CEO. “Division 2 members – the pub supply chain – are in the worst predicament. The year-end profit figures are particularly disturbing when you consider the cost cutting that businesses have carried out to mitigate loss of revenue.”

This, unfortunately, is a realisation reflected across the sectors. FEC and arcade members expect to lose 73 percent of their annual profit; adult gaming centres 56 percent; and manufacturers and distributors 75 per cent.

The statistics are bleak, all the more so given the failure – particulary in Wales – of key and vital life-support funding from government.

John White again: “We realise that the entire economy is suffering at this time, however, some of our members have had less support than other business sectors. They had no benefit from the Retail Hospitality and Leisure Grant Fund and with the near constant restrictions from closures to curfews it is hard to see how they can make it to the other side. Support for supply chains has not received enough consideration during the pandemic.”

Bacta has written to the DCMS to share these figures and to call for support.White concluded: “One of the key things that could help the industry post Dec 2 (apart from AGCs not being in Tier 3) is to abolish the curfew – otherwise it’s clear businesses will close and jobs will be lost.”