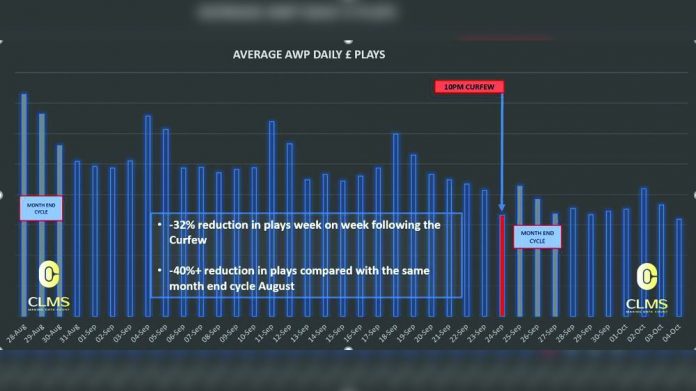 According to new data from analytics specialist CLMS, the introduction of curfew has seen pub machine takings plummet by well over a third – with Bacta concurring that the scenario facing Cat C operators is “absolutely dire”.

CLMS, the leading provider of live data collection and reporting across over 12,000 gaming and amusement machines in the UK pub retail sector, has confirmed that the 10pm pub curfew has had “a devastating effect” on machine revenues nationwide.

New figures released this week by CLMS, which collects data from over 12,000 pub machines across the country, have revealed that curfew is cutting deeper into cash box revenues than was first anticipated.

During the first week following curfew, CLMS said that it was “shocked” to report that machine play dropped dramatically by 32 per cent on the week prior. However, after following the pattern for nearly 14 days and comparing it to figures from the previous month, the reduction in customer play is even more stark: down by nearly 40 per cent.

“By the end of August, we started to see a true picture of recovery emerging,” said Simon Barff, the analytic firm’s managing director. “Operators had reclaimed the floats that they had lent to machines once pubs re-opened, so we had an accurate idea of revenues.”

Indeed, Barff went on to report that CLMS data showed that approximately 70 per cent of machines in England were up-and-running by the tail-end of summer, to the extent that the situation for coin-op stakeholders appeared “hopeful” with “green shoots of recovery.”

However, the MD said that the introduction of curfew had clearly “trampled on” this nascent recovery: a message which was firmly corroborated by Bacta chief executive John White.

“The situation for our Division Two members is absolutely dire,” he said in a joint press release between the trade association and CLMS. “As suppliers of machines to pubs and clubs, they were directly affected by the closures of venues in lockdown and yet received no support from the Retail, Hospitality and Leisure Grand Fund.”

Recent industry data suggests that a third of the Bacta membership has already been forced to make redundancies as a direct consequence of Covid-related restrictions. To that end, White claimed that the introduction of curfew would “undoubtedly add to the pressure of these companies and increase the number of jobs lost.”

“We need the CJRS extended, rates relief for 2021/22, and 5 per cent VAT and MGD for 12 months,” he continued. “That’s the only way many businesses will make it through the winter. Machine revenue is vital for pubs as well as for suppliers. Let’s stop penalising those businesses who have followed the guidance and who are not contributing to the rise in cases, before we lose them forever.”