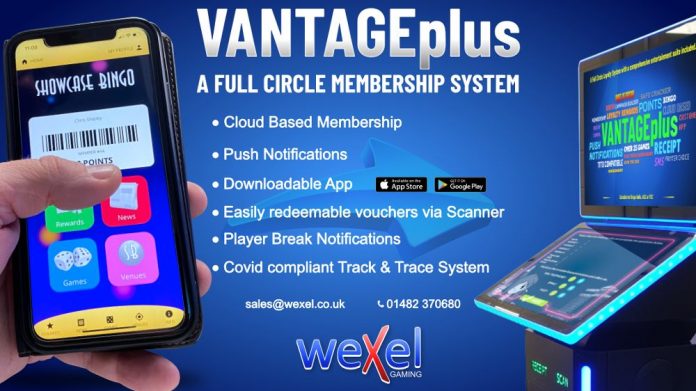 One new and key dimension to the system is its SR functioning, designed specifically by Wexel to help drive Social Responsibility models on to a new level.

And it’s an initiative the company is extremely proud of. “As with all our colleagues in the industry, we take our social responsibilities very seriously,” a representative from Wexel told Coinslot this week. “In devising this new program, we have looked at what machine manufacturers have done with player messaging and taken this a step further.

“With VANTAGEplus it doesn’t matter which machine is being played, we have incorporated into the app our “in venue timer” option. Players can set up custom notifications in the apps with personal preferences so that when they swipe in on arrival, the predetermined settings on the timer are activated. When that period of time has elapsed, an alarm notifies the player to take a break or review their machine play interaction.”

For Wexel, the new system covers all the bases, not least its player benefits which are extensive.

The VANTAGEplus system really is the full circle, exciting Membership-Loyalty-system that keeps the operator’s campaign interesting, engaging and at a very low cost, which includes, customised app, premises kiosk and back office campaign manager software

VANTAGEplus allows players to scan a barcode on self-service kiosks in-store, granting points, and enabling customers to redeem a vast range of promotions received via the app at that location.

“Different to other App based systems, which only send out notifications to the smartphone, VANTAGEplus offers more by interacting and engaging with the customer in premises,” stated Wexel Gaming.

“The VANTAGEplus system really is the full circle, exciting Membership-Loyalty-system that keeps the operator’s campaign interesting, engaging and at a very low cost, which includes, customised app, premises kiosk and back office campaign manager software.”

Points can be used by players to play Bingo, run a raffle, or play one of the many kiosk games such as Duck Shoot, Wheel of Fortune, and Safe Cracker.

For sites that are TiTo enabled the Kiosk can also print off a ticket that can be played on the slot machines. Additionally, full campaign reports can be produced by the system to determine which customers have taken up the promotions, and when, as well as identifying those who didn’t, creating a secondary promotion list in order to target those players.

The system also serves an important purpose for the modern social environment, offering a simple and immediate identification procedure “designed to help the whole community.”

“Coronavirus is affecting all our lives now, and VANTAGEplus can help by offering Track and Trace.”

“It takes a few seconds to click on the yes/no questions – a simple tool designed to help with keeping us all safe.”