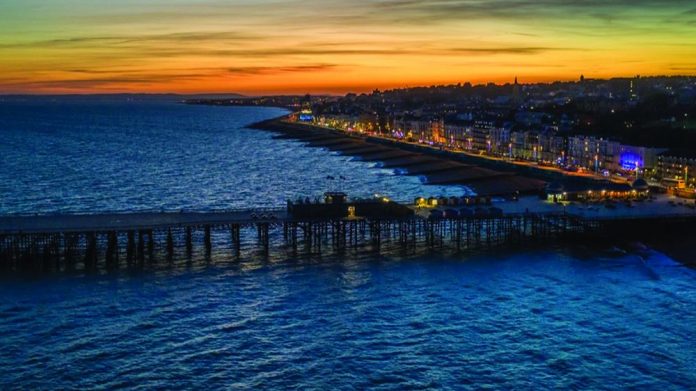 After a third-party operator claimed that Hastings Pier would soon be changing hands, interested parties, including the local council, are scurrying to find out whether there’s any truth to the rumours that owner Abid Gulzar really is looking to sell.

Rumours have been circulating locally that Hastings Pier will soon change hands, after current operators Music First Events said that they would not return to operate the attraction next year “as the pier has new owners.”

Local property magnate Abid Gulzar has owned the Grade II listed pier, which was reconstructed to much aplomb four years ago, since June 2018. But his ownership of the attraction, despite delivering a steady hand after a long period of self-destruction, has been marked by significant conflict with some vocal members of the public and Hastings council, who have questioned almost every aspect of Gulzar’s management and redesign of the once publicly-owned structure.

To that end, the announcement earlier this summer that Gulzar was outsourcing day-today management of the pier to Music First was greeted with almost unanimous approval on social media, with users and the new operators themselves welcoming the chance to “wipe the slate clean.”

Music First had initially claimed to be interested in a longer-term residency in Hastings, but its latest announcement seems to confirm their on-site tenure will now terminate on October 4, as per their original lease agreement.

Whilst the operator has cited a change-of-hands as the reason for its premature departure, Hastings Borough Council claims to have had no knowledge of any recent sales agreement, despite policy dictating that as an “asset of community value,” any prospective sale of the pier must be submitted to local legislators for formal approval.

However, as reported by the Hastings Observer, such a stipulation would not apply were the pier to be sold as a “going concern.”

“Hastings Borough Council is aware of the rumours surrounding the pier but has not been advised of any plans to sell it,” said a council spokesperson.

For his part, Gulzar himself has remained characteristically tight-lipped, leading local community group the Friends of Hastings Pier – who had intended to purchase the attraction prior to Gulzar’s successful bid – to claim that it would swiftly “follow up to clarify the situation and respond to the facts as we find him.”